•    The Domino's Pizza chain is buying 855 Chevrolet Bolts to deliver its pizzas in the United States.

•    Franchisees will pay for the vehicles, but the long-run savings for them will be significant.

•    The purchase of the vehicles is part of the company's strategy to be carbon-neutral by 2050.

By the end of 2023, the Domino's Pizza chain will have 855 Chevrolet Bolts delivering pizzas in the United States. The distribution of the EVs will vary across the United States. In the state of Michigan, where the company is headquartered, 93 Bolts will be put to work, 49 of them in the Detroit metropolitan area.

This is not a first for the company, which already has 112 Bolts in service. By the end of next year, when the 855 new vehicles are in use, the chain will have the largest fleet of electric vehicles in the country... for pizza deliveries.

For Domino’s Pizza, it's a way to meet its 2050 carbon neutrality goals, but also to attract delivery drivers, as reported by the Detroit Free Press.

“One of the many reasons to have an EV fleet is indeed to attract drivers, as it is an appealing option for drivers who don’t have a car of their own. Right now, most delivery drivers across the U.S. use their own vehicles,” said Domino's spokesperson Dani Bulger.

Aside from its Bolt EVs, Domino's already makes some deliveries using electric bikes and mopeds in 24 international markets, including the United States.

As for the Chevrolet Bolts that will be deployed, it will be up to franchisees to decide in which locations they want to have the new Chevrolet Bolt EVs, and up to them invest in charging stations. Because of the Bolt's excellent range (417 km), Domino's said in a statement that it will be possible to go full delivery days between recharges, which will result in significant savings compared to ICE vehicles.

Franchisees will lease the EVs for periods of three to five years. General Motors did not disclose the price those franchisees are paying for each vehicle, but the starting price for a model in the United States is $26,595.

Ed Peper, VP of GM Fleet, told the Detroit Free Press that this is one of the largest commercial orders for the Chevrolet Bolt EV. 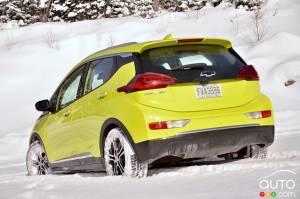