Last March, during a day devoted to electric mobility at General Motors (GM) at the manufacturer's design centre in Warren, Michigan, assembled journalists were given a glimpse of what's coming from the former global giant on the EV front. A modernized Chevrolet Bolt was on hand, as was the new SUV version of the model, the Bolt EUV.

You weren't shown anything at the time, because the scribes present had to pinky swear that they wouldn't reveal any images of what they were seeing.

This week, GM broke the ice with a first short teaser video showing the profile of its future Bolt EUV model.

Not surprisingly, it is a longer vehicle in comparison with the Bolt. In fact, GM has confirmed that the wheelbase of the new SUV will be three inches longer than the Bolt’s. That will be good news particularly for second-row passengers. Style-wise, the model's signature is recognizable via the climbing chassis line and tapered headlights. Roof rails can also be seen on the model shown.

Nothing’s revealed this time around regarding the inside of the Bolt EUV, but spy photos of test models on the road have shown a large multimedia screen that takes up a good part of the dashboard. On the steering wheel of those testers, a button giving access to the Super Cruise autonomous driving system (introduced at Cadillac) was also spotted. GM has already stated that the Bolt EUV will be the first Chevrolet vehicle to be equipped with this partially automated driving system. The new version of the Super Cruise benefits from enhancements that increase the number of functions (such as automated lane changes), as well as the number of kilometres of road recorded in the system (more than 120,000 km added).

According to Chevrolet, the next-generation Bolt and the new Bolt EUV SUV will go into production next summer. 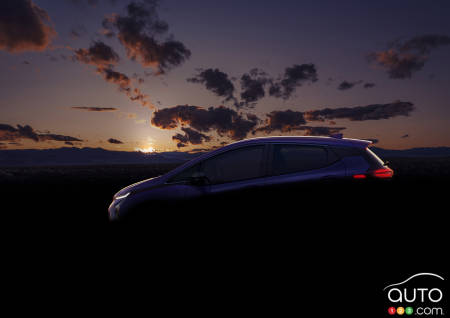 Photo: Chevrolet
Silhouette of the next Chevrolet Bolt EV