Earlier this year, General Motors (GM) issued a second major recall of the Chevrolet Bolt, which included some models that had been previously recalled because the problem with battery-pack fires had recurred.

Up to now, the recalls did not concern newer editions of the first-generation Bolt, the revised 2022 model recently introduced or the all-new Bolt EUV SUV.

This time, however, the new campaign is all-inclusive: all Bolts are being recalled to dealers. That includes the 2022 Bolt EV and 2022 Bolt EUV.

The cost of the operation is estimated to be around $1 billion USD, this in addition to the $800 million USD already spent in the first quarter of the year. Safe to say, GM will be knocking on the door of battery supplier LG.

“Our focus on safety and doing the right thing for our customers guides every decision we make at GM,” said Doug Parks, GM executive vice president, Global Product Development, Purchasing and Supply Chain. “As leaders in the transition to an all-electric future, we know that building and maintaining trust is critical. GM customers can be confident in our commitment to taking the steps to ensure the safety of these vehicles.” 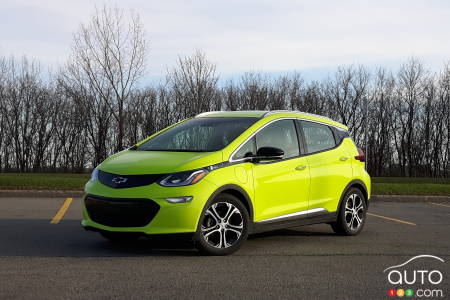 The problematic batteries, manufactured by LG in Korea, pose a fire hazard. So far, at least nine incidents have been confirmed by GM. The company will replace all the modules in the 2017-2019 model-year vehicles, but only those that are defective for the Bolt in the 2020-2022 model-years.

Batteries in the new units will benefit from an 8-year or 160,000 km limited warranty in Canada.

And if you're wondering why some units were initially excluded from the recall process, it's because 2019 models used a battery made in Michigan, not South Korea. These were not believed to be defective at the time.

It should be noted that Bolt vehicles use GM's previous generation of battery, not the Ultium battery that will appear with all future electric models in the lineup, such as the Hummer (pickup truck and SUV), electric Chevrolet Silverado and Cadillac Lyriq.