Chevrolet introduced 20 or so customized cars and trucks at the 2016 SEMA Show in Las Vegas earlier this week, and one of the most eye-catching was certainly the Chevy Camaro Turbo AutoX.

As for styling, the new Shock Yellow colour on the concept explores how the sixth-generation Chevy Camaro looks in brighter, bolder hues. It is complemented with Pearl Nickel hood stripes and satin Carbon Flash Metallic accents on the hood vents, rockers, and rear diffuser. The vented hood and front splitter come from the Camaro SS (the latter modified for the concept), while the rear diffuser and rockers were borrowed from a Chevrolet Accessories ground effects kit.

Also this week, Chevrolet announced the launch of a Camaro SS Drag Race Development Program, which explores the quarter-mile capability of the latest Camaro with concept parts designed to support 10-second elapsed times in a production-based model. 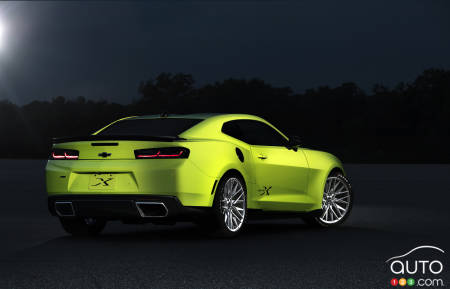 Following its world premiere in Paris, the new Honda Civic Type R prototype will make its North American debut at the 2016 SEMA Show this week. Don’t miss it!

The Story of a Man and his Camaro, Together Since 1969

This is the story of a man and his beloved Chevrolet Camaro, together since 1969. The video reveals the car has been by its’ owner’s side every step of the w...