Small cars continue to drop like flies in the current automotive landscape. Previously we learned of the demise of the Toyota Yaris and Honda Fit in North America; now Chevrolet has confirmed that it is culling the Sonic from its herd. Production of the model will end this October.

As with police investigations, the obvious suspect is usually the right one. Declining sales are the main factor that doomed the Sonic. In addition, Chevrolet had to open up production capacity at its assembly plant in Orion, near Detroit. That facility is going to be refitted to be able to produce the new Bolt-based electric SUV Chevrolet is developing for 2021, called the Bolt EUV.

News of the Sonic’s demise was confirmed to CNBC by a spokesperson for GM (General Motors).

Demand for small cars, particularly hatchback models, has collapsed since the mid-2010s. CNBC reported that while GM sold around 100,000 units of the Sonic in 2014, sales had shrunk to 14,000 in 2019. To put that total in perspective, the Sonic was outsold last year by the Bolt (16,418 units), Corvette (17,988) and the old Express van (77,457). Then consider that Chevrolet this year introduced the Trailblazer, a small SUV with roughly the same dimensions as the Sonic, and the writing was clearly on the wall for the latter. 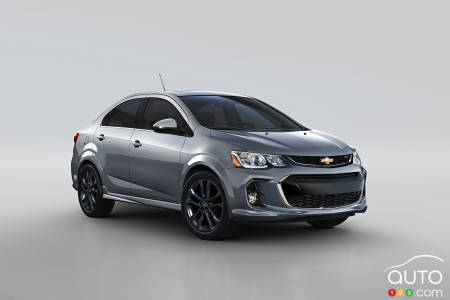 With both the Impala and Sonic departing after this year, Chevrolet’s lineup of cars is now reduced to one solitary sedan, the Malibu, and the Spark small subcompact hatchback. The former is almost surely living on borrowed time; the smart betting is that the axe will fall on the Malibu at the end of the 2023 model-year. As for the Spark, its future prospects remain murky, but few are giving it much of a chance to survive long-term.

Even over at Buick, sedans are on the outs. That automaker has confirmed it is killing the Regal after the 2020 model-year. That leaves only Cadillac to carry the four-door torch at GM. And even there, for how long? Anyone willing to bet sedans are there to stay?