Chevrolet was at the Shanghai auto show in China last month with its all-new Trailblazer, a miniature version of the new Blazer that made its debut this year. Like the Blazer, the Trailblazer name thus makes a return to the company’s lineup; it was last seen a decade ago. By the time the new edition debuts for the 2021 model-year, 12 years will have passed since the nameplate’s swansong.

This week Chevrolet has unveiled the Trailblazer version destined for the North American market. It should be hitting dealerships next April as a 2021 model.

Indications are that the revived Trailblazer will be a close cousin to the new Buick Encore GX, also presented in China last month. Within the Chevrolet lineup, the new SUV will fill the current hole between the Trax and Equinox models. 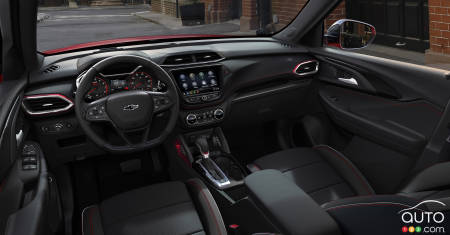 The variant shown in the first image released by the manufacturer is an RS edition, decked in a two-tone colour scheme, and it features the same aggressive-looking front end as the new Blazer.

"The Trailblazer's great design enables more personalization," says Chevy's car and crossover marketing director, Steve Majoros. "Trailblazer is a continuation of the design language for Chevy's crossover family and extends our momentum into one of the industry's fastest-growing segments."

Chevrolet declined to provide any technical details or info regarding the trims and their pricing for the North American market. For those we’ll have to wait for spring of 2020 when the model debuts officially.

The 2021 Chevrolet Trailblazer, the GM brand's new subcompact+ SUV, delivers surprisingly healthy performance despite its small engine. While it has its limi...