On Tuesday of this week, and again on Wednesday evening, Ford was forced to briefly shut down production at its Chicago plant after two workers at the nearby SHO Center tested positive for Covid-19.

This is the first known incident at Ford since the automaker resumed production at most of its North American assembly plants on Monday, and it highlights a new reality. Production will not go back to normal as long as the coronavirus is around. In order to avoid permanent shutdowns, we can count on seeing temporary closures as cases occur here and there. This time is was Ford, but it could be Honda, General Motors or Toyota tomorrow.

The SHO Center, named after the Taurus SHO sedan that was previously assembled in Chicago, sits about a kilometre from Ford’s main Chicago assembly plant. Workers at the centre prepare parts for the Ford Explorer and Lincoln Aviator SUVs. 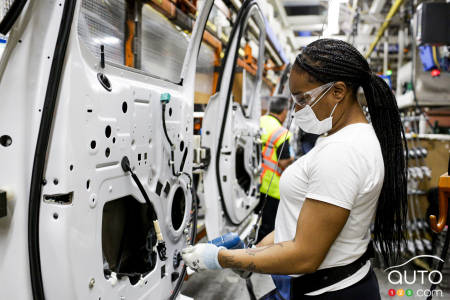 Photo: Ford
Inside the Ford factory in Dearborn, Michigan, on May 18

Both of the employees who tested positive had registered normal body temperatures and passed the daily health check process. It’s not known at this time how Ford learned they were sick or where they were tested for the virus.

“The safety of our work force is our top priority. When two employees who returned to work this week tested positive for COVID-19, we immediately notified people known to have been in close contact with the infected individuals and asked them to self-quarantine for 14 days. We also thoroughly cleaned and disinfected the work area, the equipment, and the entire route the crew members were able to take. The work is now back to normal.”

She explained as well that the employees did not contract the virus during their working hours. Ford had previously advised that it would offer testing to employees with symptoms in metropolitan areas, including Chicago, where it has assembly plants.

Union spokesman Brian Rothenerg said his group was keeping the situation under close watch. “We continue to monitor intensely the implementation of health and safety protocols to protect our members, their families and the community.”

For the second time in a few weeks, production of the next-generation 2021 Ford F-150 has been pushed back. The same applies for the date on which pre-orders...