There’s been much anticipation in automotive circles in recent months of a new SUV coming to the Dodge lineup and taking the Hornet name. Now it appears that the close cousin of Alfa Romeo’s just-introduced Tonale SUV has reached the testing phase. To wit, early spy images of the model have surfaced online, and they show that at least the front end has an uncanny resemblance to its fancier Italian relation.

Screenshots from a Facebook video posted on Italian forum Autopareri confirm the similarities between the Dodge and Alfa Romeo crossovers.

The video itself has since been removed, but not before screenshots were let loose online. Those show that not just the exterior but the interior of the Hornet follows the Tonale formula closely.

And as the images from the video, which has since been removed, show, the resemblance is real. This is true for the exterior as well as the interior. The differences are in the logos, the vehicle’s snout, headlights and body accents that indicate this could be a particular trim, perhaps an R/T model. 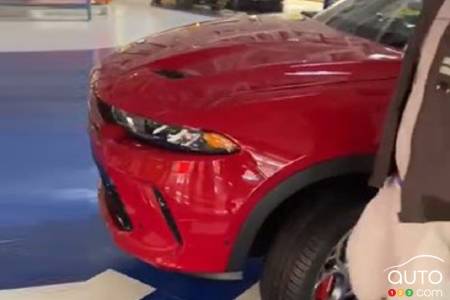 It's quite possible that Dodge’s SUV will come with a less-powerful engine, in line with the segment it will compete in, which won’t be the same as that of the more-expensive Tonale.

There’s strong speculation that the Dodge Hornet will be presented at some point this year, as a 2023 model. We will of course come back to you with all the details when the vehicle is unveiled.

Images of the New 2023 CR-V Appear Online Ahead of Offici...

The CR-V will get a new look in 2023, and its official unveiling is imminent. Before that happens though, two images of the model have leaked and are touring... 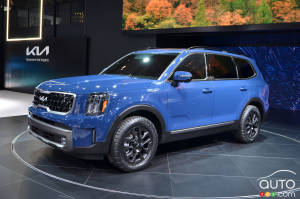 The revised Kia Telluride made its official debut today at the 2022 New York Auto Show. The same tiger-nose grille is still there, but it's been modified, as...