The AJAC EcoRun got under way for real this morning, June 21 2018, in the centre of Moncton, New Brunswick. The city’s mayor, Dawn Arnold, and the provincial minister of finance, Cathy Rodgers, were both on hand to wave the green flag in front of City Hall to signal the start of the run for the 19 Canadian AJAC journalists, each of us on board the vehicles allocated to us, as mentioned in yesterday’s dispatch.

The Finance Minister, it should be noted, underlined that owners and tourists driving an electric or plug-in hybrid car in New Brunswick now have access to 18 rapid and over 30 regular charging stations. As a result, since last year, nearly 95% of the province’s tourist attractions have been equipped with electric-car charging stations.

Organizers of the EcoRun handed over the cars to participants for the first stage of the drive, which took us from downtown Moncton to an outdoors activities complex in the Sussex region, where several of the vehicles had to be recharged. The hour-long changes also meant wholesale changing of cars among the drivers, and then we were off again, in direction of Fredericton in time for lunch.

Participating as a representative of auto123.com, I started the program at the wheel of the brand-new Toyota Prius Prime, a plug-in hybrid car with an all-electric range of around 40 km. The small car ate up the first kilometres on electric juice only before slipping into gasoline engine mode (still complemented by the electric motor in certain situations). By the time I pulled into the Snider Mountain Ranch outdoors activities complex, the onboard computer indicated average fuel consumption of 2.6L/100 km, after driving 108 km.

After the car changeover, I left in the just-released new Mazda6 with 2.5L 4-cylinder SKYACTIV engines; its presence at the EcoRun can be explained by the fact that it’s the first 4-cylinder in North American to have a system for deactivating two cylinders while at cruising speed. As it happens, the timing for me to drive this model was perfect, as a good part of the route taking us to the restaurant for lunch was via the Trans-Canada Highway. By keeping the speedometer at 90 km/h, I racked up a fuel-consumption figure of 5.1L/100 km over a distance of 111 km. 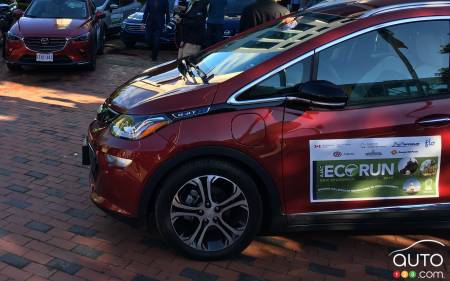 The official start of the 2018 EcoRun, at City Hall in Moncton 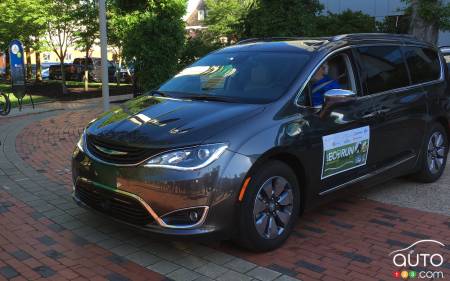 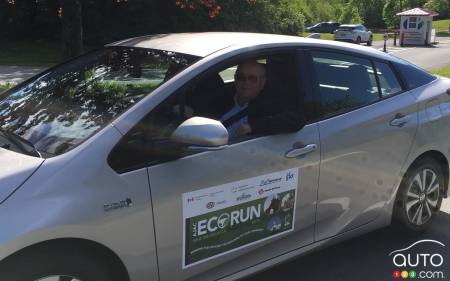 Yours truly, at the wheel of the Toyota Prius Prime 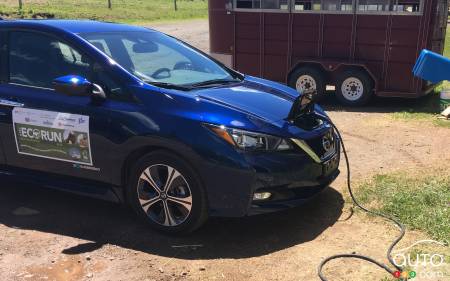 Some vehicles were recharged at the Snider Mountain Range 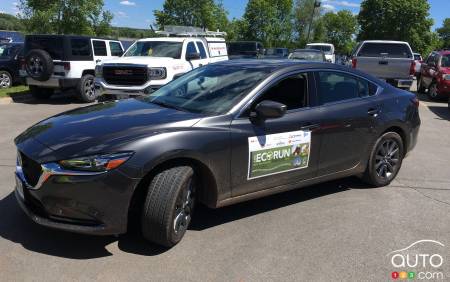 My ride for the drive into Fredericton, the Mazda6 with SKYACTIV-G engine

The seventh edition of the annual EcoRun sees a handful of journalists belonging to the AJAC (Automobile Journalists’ Association of Canada) put to the test ...