Dodge called it quits on its Viper super car in August of 2017. The move seemed pretty definitive, as the company even went ahead and converted a part of the Viper model’s assembly plant into a car museum.
But now it appears that the announcement of its death may have been premature.

Car & Driver magazine reported that Dodge intends to bring the model back, although it will adopt a different approach this time around. The new Viper-badged car will rest on a lightweight spaceframe chassis, made in large part of weight-saving aluminum and carbon fibre. The new Viper will be offered in both coupe and convertible iterations.

Under the hood, the reborn Viper will no longer run on the V10 that made the model famous; it will be replaced by a naturally aspirated V8. This engine will get an aluminum block and produce 550 hp, with a high-performance version boosting that to around 700. As before, the mechanics will be mounted between the front axle and the firewall to bring the weight balance closer to the centre of the car. 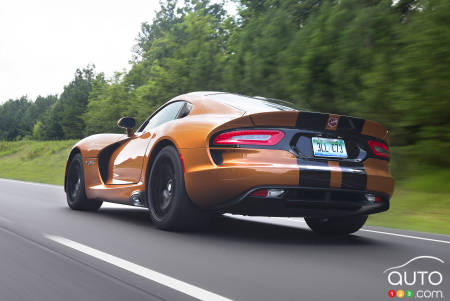 According to Car & Driver, Dodge plans to unveil the reborn Viper at the North American International Auto Show in Detroit next January. Given all the big automotive names that will be skipping that event in 2019, the Viper should benefit from that much more visibility. Dodge also no doubt intends to steal some thunder away from Chevrolet, which is set to introduce its mid-engine Corvette at the same show.

If the rumours are accurate, the Viper would return to the market in 2020 with a base price hovering around the $100,000 USD mark.

Dodge is of course refusing to confirm any of this, so it’s worth keeping in mind that this could all be nothing but hot air. But as the new details come courtesy of the highly credible Car & Driver, it’s worth taking notice of.

We recently drove the 2019 Dodge Challenger SRT Hellcat RedEye, a monster that must be respected in order to be properly tamed.

Return of the Viper? Forget it… For Now

It wasn’t selling and therefore it wasn’t profitable. In a nutshell, this is why the Viper is gone and won’t be back in the near-term, according to Fiat-Chry...