The Polestar 2, the second car offered by Volvo's electric division, has barely hit the market and it’s already being recalled.

The fledgling auto manufacturer, owned by Volvo and its Chinese parent company Geely, is recalling all new Polestar 2 cars due to a software problem. The news was reported on Friday by the business daily Dagens Industri (DI).

The recall concerns almost 2,200 vehicles that have been delivered so far. The company has received several reports of models ceasing to operate without warning while on the road, according to the DI newspaper.

“There have been no accidents or injuries”, a Polestar spokesperson told the publication. “The brakes, steering and other systems are working as they should in the event of a problem”.

The newspaper reported that all owners were notified on Friday and were encouraged to have the software problem fixed as soon as possible by visiting a service centre.

The Swedish automaker began producing its Polestar 2 sedans this year in China; the model is sold there as well as in Europe and North America.

Polestar CEO Thomas Ingenlath said in August that the company is targeting annual sales of more than 50,000 units within two to three years.

To reach that goal, the kind of missteps like this one will have to be few and far between. 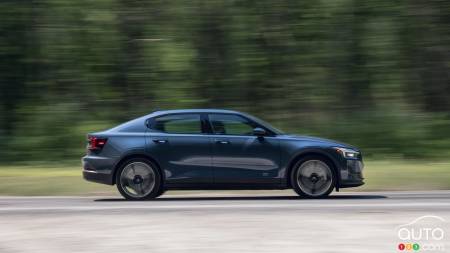 Photo: Polestar
Polestar 2, on the road