Ford has shed more light on its electrification plans for the coming years. According to Automotive News, the auto manufacturing giant has established a new group, called Team Edison, that will be tasked with studying and developing future 100% electric vehicles.

Ford had announced last February its intention to produce at least 13 hybrid or electric models in the next five years, including a Mustang Hybrid, an F-150 Hybrid truck and most notably a fully electric crossover with a range of around 480 km.

"We see an inflection point in the major markets toward battery electric vehicles. We feel it's important to have a cross-functional team all the way from defining the strategy plans and implementation to advanced marketing."

No target date has been set (or publicly announced) for the future Ford-branded electric vehicles. Marakby did confirm that Ford and its Team Edison will work towards creating partnerships in the field. Already, the company had announced in August that it was teaming up with Chinese manufacturer Anhui Zotye Automobile Co. to produce electric vehicles for that country’s market. 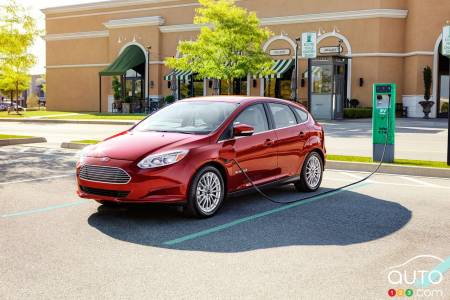 Ford has just published a few images and a video showing the new Mustang-inspired electric SUV in testing ahead of the model’s official public debut, expecte...

A faulty charging cable has led Ford to issue a voluntary recall of around 50,000 electric and plug-in hybrid vehicles. The manufacturer-supplied 120-volt ca...