The Ford EcoSport was never a success story in North America. History has not been on its side on this side of the Atlantic. Outdated from the moment it arrived on our market, the small SUV will now be quietly retired from the North American market as of mid-2022.

Ford recently announced that it was withdrawing from India after 25 years manufacturing vehicles there. The automaker’s finances will be impacted by the move, to the tune of $2 billion, this in addition to the $2 billion it had already bled in that market over the past decade. Some 4,000 employees will suffer as a result. And there's another victim: In the wake of the move, Ford has now confirmed to the Detroit Free Press that the EcoSport will not be sold in the United States or Canada after the end of production in India.

In a separate statement to Automotive News, a Ford spokesperson said, “With Ford India’s restructuring announcement, the Ford EcoSport will now be sold in North America only through the second half of 2022. From then on, it would “continue to serve EcoSport customers with parts, service and warranty support.” 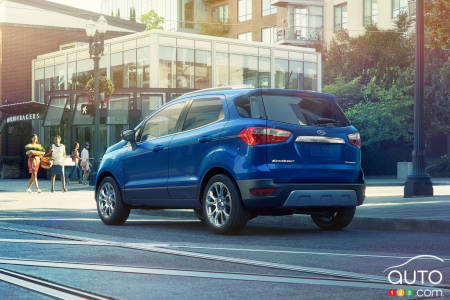 European markets will continue to have access to the EcoSport, which for them is made in Romania, and that will continue. As mentioned, the North America version came from the Chennai plant in India, which will be closed by the end of June 2022.

For all that, if we look at the sales figures of the model, we can't say that it was bad last year.

The real problem with the EcoSport is that when it debuted here in 2018, Ford was basically serving up leftovers to North American customers. The model had already been available in that version for a few years elsewhere in the world. Reliability issues and a rather hefty selling price represented two further strikes against the little SUV.

Sales from here on in will no doubt take a further hit, now that everyone knows the EcoSport is on its last legs here. Expect to see the manufacturer make some attractive offers for the models.

Ford Is Pulling its Transit Connect Van from North Americ...

Ford will discontinue the Ford Transit Connect in North America, according to Automotive News. The van will be taken off the market at the end of next year.