Here’s an interesting data point that folks will do what they want with, but is definitely food for thought: During the month of July just ended, Ford sold more of its Mustang Mach-E EV than it did of its Mustang gas-powered car in the United States. This is the second month this year in which the first outperforms the second – the same thing happened in May.

The American automaker recorded 4,970 sales for the new Mustang Mach-E last month, while selling 3,367 units of the traditional gas-engine Mustang, for a difference of 1,603 units. The figures were reported by Motor 1.

For the current year to date, the Mustang does keep its nose in front, with sales totalling 29,611 units compared to 22,645 units of the Mustang Mach-E sold.

As for sales of EVs globally, Ford saw a massive 168.7-percent jump in vehicles sold in July compared to the month prior. That increase was led by the F-150 Lightning as significant numbers of the truck started to find their way into the possession of their new owners (sales in July reached 2,173 units). Ford is also pointing out how well it’s doing with its E-Transit electric van, which it sold 526 units of last month. 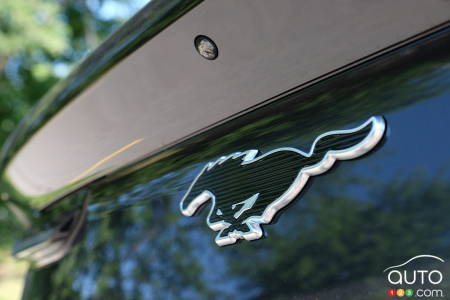 Michigan State Police have implemented a pilot project to evaluate the possibility of using Ford Mustang Mach-Es as police vehicles. An adapted version of th...