Ford has 64 recalls to its name since the beginning of the year Automotive columnist: Dan Heyman , Updated: 2022-11-25

Ford is recalling nearly 519,000 Bronco Sport and Escape SUVs in the U.S. due to a fire hazard caused by possibly cracked fuel injectors. The company will ask owners to have their vehicles inspected.

Automotive News reported that the campaign covers 2020-2023 model-year vehicles equipped with the 1.5L turbo 3-cylinder engine. The new recall includes a large number of vehicles recalled in April because the oil separator housing could crack and develop a leak that could cause a fire. 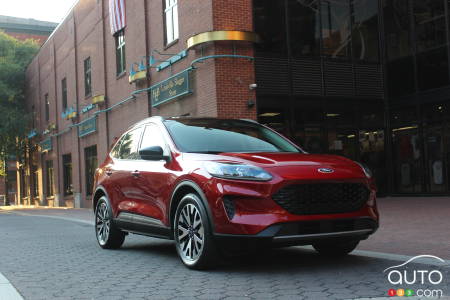 Ford said that when the engines in the vehicles affected by the latest recall are running, a cracked fuel injector could cause fuel or fuel vapour to build up near hot surfaces. This, of course, can cause a fire under the hood.

The company said it has received 54 reports of under-hood fires on 1.5L engine models, including four that show cracked fuel injectors. 13 others were likely caused by a leaking fuel injector. There are no fatalities associated with this recall.

As soon as repairs are possible, dealers will update the vehicle's software to detect if a fuel injector is cracked. If so, a message will appear on the dashboard to alert drivers.

Ford added that “if a pressure drop in the fuel rail is detected, engine power will automatically be reduced to minimize any risk, while also allowing customers to drive to a safe location and stop the vehicle and arrange for service.”

Dealers will also install a fuel drain tube from the cylinder head, away from hot surfaces. They will also check for excessive fuel odour near the top of the engine.

Ford said it is not asking owners to stop driving vehicles affected by the recall. The firm expects a low failure rate for fuel injectors with external leaks.

According to the National Highway Traffic Safety Administration (NHTSA), the equivalent of Transport Canada, Ford has reported the most vehicle recalls of all carmakers in the U.S. so far this year, with 64 campaigns covering 8.6 million vehicles.

For the second time in as many months, GM recalls hundreds of thousands of vehicles to fix a problem with the daytime running lights. Auto123 has more.

Subaru is recalling its Ascent SUV to address a fire hazard. The company recommends owners park their vehicle away from structures and not leave it unattende...