The automotive universe is always rife with rumours and speculation, but when certain ones resurface persistently, complete with “anonymous inside sources”, we start to take them a little more seriously.

One of those concerns the next version of Ford’s Raptor, the off-roading performance version of the F-150 pickup. And it involves the automaker transplanting into that upcoming version the engine of the 2020 Shelby GT500, a 5.2L V8 making over 700 hp.

And what would motivate Ford to take this step? Two things, principally. First, Ram will be introducing within the next 18-to-24 months a Rebel TRX version of its pickup. That new edition will feature the company’s famed Hellcat engine that delivers more than 700 hp to several of the company’s models. And second, the company has been piqued by criticism from Raptor fans over the absence of a V8 in the product offering. While the reworked EcoBoost V6 in the current version is certainly able, the feeling for drivers is not the same starting with the sound produced.

Other Raptor-related rumours have alluded to the 7.3L V8 engine that will serve the HD version of the F-Series trucks in 2020. Clearly, the tea leaves point to a V8 of some kind or other for the Raptor. 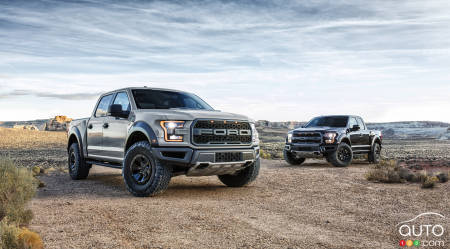 If the heart of the Shelby GT500 makes the switch to the Raptor’s engine compartment, it likely won’t use in it the same dual-clutch 7-speed automatic transmission that the sports car will get. The more obvious choice is the 10-speed automatic already in use in the F-150. Developed conjointly with GM, that unit is able to effectively manage the 650 hp and 650 lb-ft of torque available to the Chevrolet Camaro ZL1.

Unsurprisingly, Ford is not commenting on this rumour. We’ll have to wait for official pronouncements from the company before we can confirm anything. Any unveiling of the Raptor and its engine is likely to come towards the end of the year, say at the Los Angeles auto show.

The irony, of course, is that we will soon (or soonish) see dealerships selling pickup trucks fitted with monstrous 700- or 800-hp V8s right alongside identical trucks powered by electricity.

As we’ve mentioned before, we’re in the midst quite an eventful chapter in the history of the automobile.

Ford has confirmed the performance numbers for its upcoming new 2020 Shelby GT500. The company’s most-powerful production car will benefit from 760 hp and ma...

AWD and 275 HP for the Hyundai Kona N

Rumours about the mechanics of the N version of the Hyundai Kona are looking pretty confirmed. The sportier variant of the small SUV will run on a 2.0L turbo...