Sign of the fluctuating times: Even as General Motors continues its process of closing plants in the U.S. and Canada, new figures show that the American automotive giant is now the biggest producer of vehicles in Mexico.

Which may be just the kind of news that adds fuel to the fire when it comes to the plant closings.

The figures were reported by Automotive News, which also wrote that Mexican production represents one-quarter of all of GM’s production for North America.

The underlying reasons for much of this are familiar. Manufacturers continue to benefit from the lower salaries earned by Mexican workers. As a result, the percentage of vehicles assembled in Mexico as compared to North America as a whole continues to grow. Quick confirmation comes from a look at the other side of the equation: production fell by 3% in the U.S., while in Canada it dropped by 8.8%.

GM argues that it has not increased production capacity in Mexico for more than a decade, and that it does not intend to either. The company explains the figures by pointing to market trends that show consumers turning away from cars (built in the U.S.) in favour of pickups and SUVs (assembled in Mexico).

This is certainly true. On the other hand, knowing that sales forecasts are always determined far ahead of time, it’s entirely possible for a manufacturer to determine where vehicle production will be the most profitable.

And profits are what the manufacturers are in business for, lest we forget.

As well, over and above where vehicles are built, there’s also the question of where their components are manufactured. We were just recently at the launch of the new 2019 GMC sierra AT4, and the model’s data sheet was very instructive. Technically the truck is being assemble at the company’s U.S. plant in Roanoke, Indiana; but only 42% of its components come from elsewhere in the U.S. or from Canada, while 46% are made in Mexico (the last percentage was not detailed on the data sheet).

The precise origin of a vehicle, in other words, can be a complicated question. 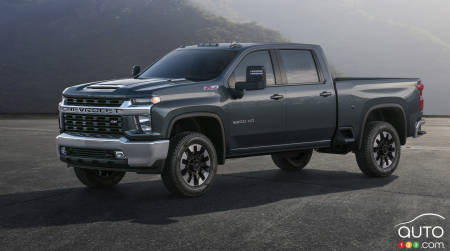