General Motors (GM) said Tuesday it plans to deliver its first 20,000 masks to groups fighting the COVID-19 pandemic by April 8.

Once at full capacity, the automaker says it will be able to produce about 1.5 million masks per month at the Warren transmission plant it closed last year.

The announcement of this significant mask production capacity comes after President Donald Trump criticized GM last Friday for "wasting time" in its efforts to produce ventilators through its partnership with Washington-based Ventec Life Systems - accusations that GM vehemently denies.

The president signed an order under the Defense Production Act to press GM to produce ventilator more quickly, even though the automaker had confirmed that it was already moving ahead with that. Specifically, the automotive giant plans to assemble 10,000 devices per month at its Kokomo, Indiana plant.

GM launched its plan to develop mask production on March 20 and a week later, the on-site team had produced its first sample on a new production line. More than 30 engineers, designers, buyers and manufacturing team members are involved in product development, in sourcing materials and equipment and in planning the production process. 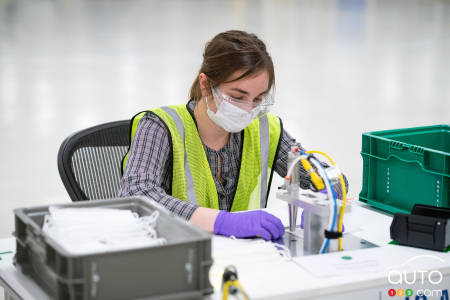 “Working around the clock, our team rallied with incredible passion and focus to come up with a plan to produce masks that will help protect the women and men on the front lines of this crisis."

The raw materials, including metal parts and elastic straps, were sourced through GM's existing supply chain. The manufacturer worked with JR Automation in Holland and Esys Automation in Auburn Hills, Michigan, to design and build the specific machines needed to assemble the masks.

The first mask was completed at 2:30 p.m. last Friday. By Monday, more than 2,000 had been produced. These will be checked to ensure that quality standards are met before "official" production begins.

“Not only did the team make their goal, but they over-delivered. They actually beat our deadline, running the first mask through the equipment 30 minutes ahead of target. We’re excited because this means we’re even closer to being able to protect the healthcare teams who are working tirelessly to save lives,” added Thom.

When production is running at full capacity, GM will be able to assemble up to 50,000 masks per day.

GMC Hummer EV: the Big Comeback Will Have to Wait

The big comeback of the name Hummer at GMC will have to wait due to ongoing coronavirus outbreak. Indeed, the pandemic will make it impossible to present the...

U.S. President Donald Trump on Friday ordered GM to manufacture ventilators. The company was already partnering with Ventec to do so, but the invocation of t...