General Motors says it is about to double the size of the network of North American roads that can be driven using its Super Cruise semi-autonomous, or assisted driving, function. This system allows for hands-off-wheel driving on divided roads, recall. With the update, the system will cover almost 650,000 km of highway on the continent; some of those will be undivided roads, and among them we find Route 66, U.S. Route 1 and the Pacific Coast Highway.

Canadians specifically will get triple the number of kilometres of roads that can be driven using Super Cruise, with coverage increasing from 24,000 to nearly 80,000 km. A large portion of the increase comprises the Trans-Canada Highway and roads leading off of it.

Those of GM’s vehicles that already feature the Super Cruise system will receive an over-the-air software update to plug them into the additional km of the network. Otherwise, the company says new vehicles coming out of the factory later this year that have the VIP electric architecture will have the updated Super Cruise system already installed. 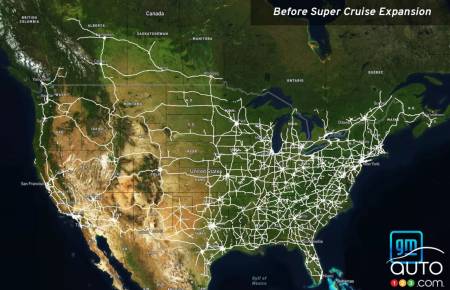 Photo: General Motors
Network of mapped roads, before the update 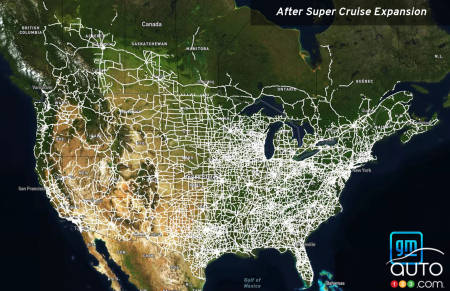 Photo: General Motors
Network of mapped roads, after the update

Super Cruise
The system used radar and cameras as well as GPS data and LiDAR mapping to keep the vehicle centered in its lane even with no hands on the wheel. In addition to the steering, it also manages accelerations and braking to maintain a pre-determined distance between vehicles. On some models, it can also carry out lane changes even if not initiated by the driver.

Importantly, the system also monitors the driver’s attentiveness level by checking on head and eye positions and movements.

Ultra Cruise
Note that already, the next generation of semi-autonomous driving technology, called Ultra Cruise, is in the works and should be ready by late 2023 (and launch first in the Celestiq model). GM says it will allow the vehicle to handle up to 95 percent of driving tasks autonomously, and not just on highways but on suburban and urban roads as well. When it launches, it’s estimated the Ultra Cruise system will be usable on 3 million km of roads in Canada and the U.S. Eventually that could reach 5.6 million km.

Cadillac’s Super Cruise Technology will Migrate to Other ...

GM will expand use of Cadillac’s Super Cruise autonomous driving system to other models made by the luxury brand, but also the range of vehicles produced by ...

GM’s transition to electric mobility is being spearheaded by Cadillac, but with only two EVs known to be in the works, the luxury brand will have to step up ...