A mask for your vehicle, really? Yes. But no, we’re not talking about a cover for the front grille. But yes, that is essentially the role the new Kurumaku technology plays. But no, it's not there to protect your vehicle. Rather, it intends to protect the vehicle’s occupants from airborne viruses.

Whether it proves really useful or not remains to be seen, but with the new variant of the virus rapidly making its way around the world, and the possibility in the future of other forms of airborne viruses also making their appearance, Honda is betting this kind of system will be needed for some time to come.

The automaker’s new Kurumaku antiviral product is designed for placement on the cabin air filter, acting as a mask on the filter to prevent the spread of airborne viruses. Honda says the product catches virus droplets thanks to its special surface, reducing their shape and damaging them at the same time. The technology uses a chemical conversion treatment with zinc phosphate, which is also used to prevent rust on vehicles.

Unlike the CN95 filters used by other carmakers like Geely, which prevent the entry of viruses and other particles larger than 0.3 microns in size, Kurumaku destroys existing viruses in the passenger compartment, such as those you might have picked up on a trip to the grocery store. 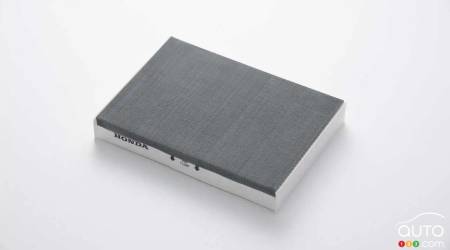 Honda believes Kurumaku can eliminate 99.8% of the virus droplets floating around in the car within 15 minutes of activating the air recirculation. Viruses on surfaces, on the other hand, will take 24 hours to be eradicated. It should be noted that the Kurumaku is an accessory that must be replaced every year or every 15,000 km.

The Kurumaku will initially be offered in Japan on the Honda N-Box as an original accessory, with an MSRP of 6400 yen, the equivalent of between $90-100. Odds are the product will gradually become available for other Honda vehicles and in other markets.

And here you thought maybe we were going to be done talking about viruses now that the calendar has flipped to 2021. A new reality is among us and even though there’s good reason to think there will be a return to some semblance of normality in the coming months, automakers are going to think of all sorts of tricks to better protect motorists and their passengers in the future.