Hyundai has already made it known it is working on a full-size SUV to be introduced next year as a 2020 model. The Korean automaker unveiled a concept model called the Grandmaster this past June, and speculation is the production version will get the Palisade nameplate.

New rumours are now floating that Hyundai is also working on a second big-size SUV, one that would go head-to-head with vehicles like the Nissan Armada and Toyota Land Cruiser (our Lexus LX570 in Canada). While the Palisade is more focused on comfort, the new, as-yet-unnamed model could be more rugged in nature.

Hyundai has once before produced a model of this type, called the Terracan. But that utility vehicle, never offered in our market, only lasted for one generation. 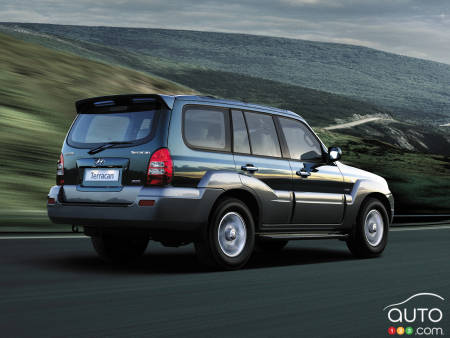 There’s no word yet on whether Hyundai will build its new big SUV on the ladder frame common among “genuine” utility vehicles, and which both the Nissan and Toyota models mentioned above feature. At present, no Hyundai vehicles have this type of structure, and even the upcoming Palisade will be built on the platform used for the Santa Fe.

In this regard, some perspective is in order.  Production for this new model is expected to start only in 2022, plenty of time for all sorts of changes to be made and technologies to be developed.

Another question revolves around where Hyundai decides to sell its big SUV, if it does decide to move to production. Will it be offered in North America, unlike the Terracan?

Much, in fact almost all of it, remains uncertain. But given that Hyundai has shown it is serious about populating every vehicle segment out there, chances of this new model coming into existence in some form or other are fairly good.

A New Tiny SUV is in the Works From Hyundai

Hyundai confirmed that it will be presenting a new, sub-Kona SUV at the next New York auto show in April. Despite its unfashionably (for this continent) smal...

The Santa Fe is all new for 2019, as it marks the beginning of the mid-size crossover’s fourth generation. The styling is a big departure from the 2018 model...

Hyundai will be introducing a full-size SUV next year, and it has just provided an advance look of that model with its presentation of the Grandmaster concep...