The seventh-generation 2021 Hyundai Elantra is set to be introduced next week at a special premiere event in California. In order to get tongues duly wagging and attention properly focused, Hyundai today released a few images and a short video.

One of the key elements of the exterior design is the union of three lines of characters in a single dot on the front doors, creating what Hyundai calls its "polyhedral appearance". Said the automaker in all humility in a statement, “This formation is a daring challenge, which has been avoided in car design, marking Elantra's disrupter spirit."

Inside, the focus is on the driver with side-by-side displays for the instrumentation and multimedia system.

"Low and wide structures go from the door and connect all the way to the center console, while the large interface consisting of two harmoniously integrated displays elevates the racing-inspired feel of the car," the automaker said. The partial integration of the multimedia system screen into the instrument cluster, the contrasting accents on the steering wheel and the clean lines of the interior are particularly striking features. 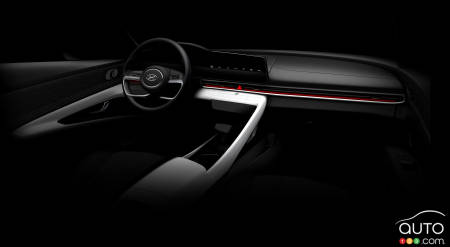 Dimensions-wise, the new Elantra will be longer, lower and wider than the one it replaces. It looks like a four-door coupe with a sloping rear roof as part of its "Parametric Dynamics" design theme.

In the rear, we can recognize a signature that's similar to the new Sonata. The front end looks like it plunges a little less than the bigger sedan’s, however. Given the mass-market popularity of the model, Hyundai may have decided to play it a little safer.

The world premiere of the 2021 Elantra is set for March 17 in West Hollywood, California. At that moment we'll have more details to share with you, especially regarding the variants and mechanics that will be reserved for the model.

We mentioned mass-market popularity: The Elantra is Hyundai's best-selling car in the world, with more than 13.8 million units sold since its launch in 1990.

Our review of the 2020 Hyundai Elantra

Hyundai Canada unveils pricing for its 2021 Elantra. The model lineup includes a hybrid variant for 2021, as well as a sporty offering under N Line series ba...