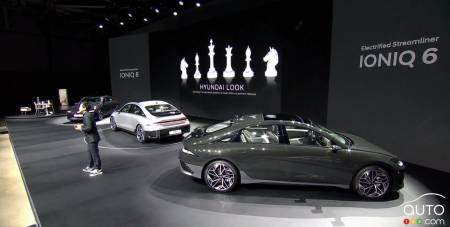 Hyundai has rolled out the latest to join its burgeoning lineup of all-electric vehicles under the Ioniq sub-banner. The Hyundai Ioniq 6, dubbed an “electrified streamliner” by its maker, is clearly focused on delivering a lounge-type interior to go with the high-output, extended-range, quick-charging electric powertrain we’ve already met in the Ioniq 5 crossover.

The E-GMP architecture underpinning the Ioniq 6 gives it a 77.4-kWh battery, 800-volt charging capacity on ultra-fast charging stations (allowing for 10-to-80-percent charging in 18 minutes) and a range that’s given as 610 km on the European WLTP testing cycle. That should translate into a North American range of between 450-500 km.

Buyers can choose between single-motor (RWD) and two-motor (AWD) formats. Thew dual-motor version should deliver an output north of 300 hp, with 220 hp the expected figure for the single-motor variant; these numbers are still to be confirmed.

All of that is roughly equivalent to what the Ioniq 5 delivers, so where the 6 distinguishes itself is inside. The large, comfortable and highly customizable space is designed explicitly to appeal to those who like the environment of an executive saloon-type car. According to Hyundai, buyers will delight at the “ergonomic interior on a 2,950-mm wheelbase”. In the words of Hyundai’s Thomas Schemera:

“IONIQ 6 is designed and engineered to seamlessly enhance our daily lives as space to awaken your potential. The innovative interior is meticulously thought out as a cocoon-like personal space, enhanced with the latest technologies to create a safe, fun, and stress-free driving experience. The spacious interior, with sustainability and usability at its heart, once again represents a step forward for electric vehicles, in line with the values of our customers.”

A “mindful cocoon”
The customization possibilities start with the Dual Color Ambient Lighting, which allows for modifying the look and feel of the interior cabin via a spectrum of 64 colours and six pre-selected themes. It’s supplemented by the Speed Sync Lighting mode, which allows for changing the brightness of the interior lighting in the first row based on the vehicle’s speed.

Then there are optional Relaxation Comfort Seats, which allow users to adjust the angle of seating for optimal comfort, Hyundai promises. The automaker points out all the seating for the Ioniq 6 was designed specifically for use in EVs, and each seat is about 30-percent thinner than conventional seats, further increasing the already-ample interior room available to occupants. USB ports are splayed throughout the interior (four type-C and one type-A in all).

Pushing further, drivers can adjust steering effort, motor power, accelerator pedal sensitivity and driveline mode, individually or as part of set combinations, via a few button clicks to suit their preferences. As well, something called e-ASD allows for enjoying what Hyundai calls “spaceship-like sound” and “sound texture changes based on the vehicle’s driving status.”

Note one interior difference between the Ioniq 5 and 6: the former has a sliding lower centre console, while the latter’s is fixed in place. 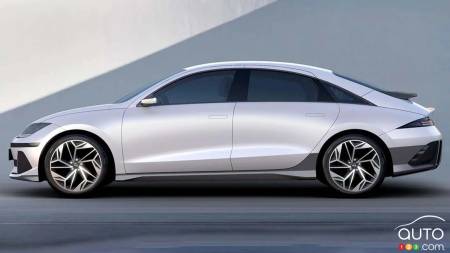 You want tech? You got it
Beyond the roominess and the comfort features, the Ioniq 6 also comes with the expected modern goodies like a 12-inch infotainment touchscreen and 12-inch digital data cluster. The first of those delivers “real-time travel radius mapping based on the current state of charge. The system’s connected car services also help search and plan the best route to include a charging station along the way.” Android Auto and Apple CarPlay connectivity are included, while Bluetooth multi-connection support is available.

The Ioniq 6 is equipped with the latest iteration of the Hyundai SmartSense advanced driver assistance Systems, which include highway driving assist, smart cruise and forward collision-avoidance assist. Higher trims add functions like junction crossing, lane-changing oncoming and lane-changing side along with evasive steering assist.

Some of those are obviously semi-autonomous drive systems, and there are more of them in the Ioniq 6, for instance intelligent speed limit assist, blind-spot collision-avoidance assist and high beam assist. Not to be forgotten, because that’s their point, are the drive attention warning and safe exit warning feature.

Also of note, the Ioniq 6 is Hyundai’s first model to offer the Over-the-Air (OTA) Software Update feature for various controllers, which allows for upgrading controllers for electric devices, autonomous driving, battery and more. Drivers can also update maps and media software with this function.

Hyundai is set to begin production of the Ioniq 6 in the third quarter of 2022, with the market launch schedule still to be announced. Pricing is, obviously TBA. Note as well that specifics of the model as presented today concern the global edition, and there may be slight differences with the product offering in Canada. North American/Canadian specifications and market arrival details for the Hyundai IONIQ 6 will be announced in the coming months. 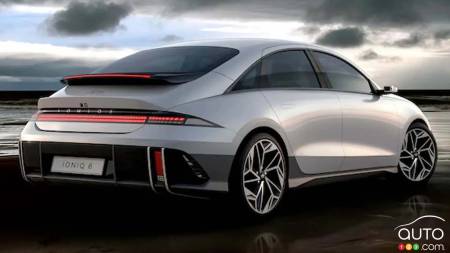 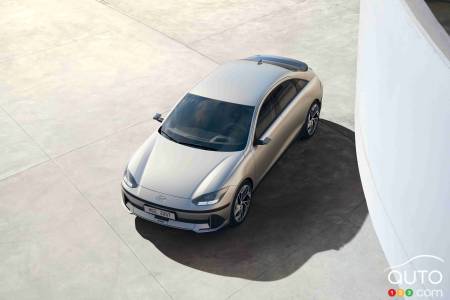 Photo: Hyundai
Hyundai Ioniq 6, from above 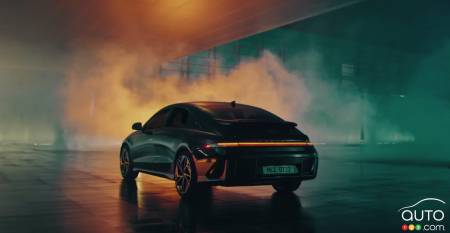 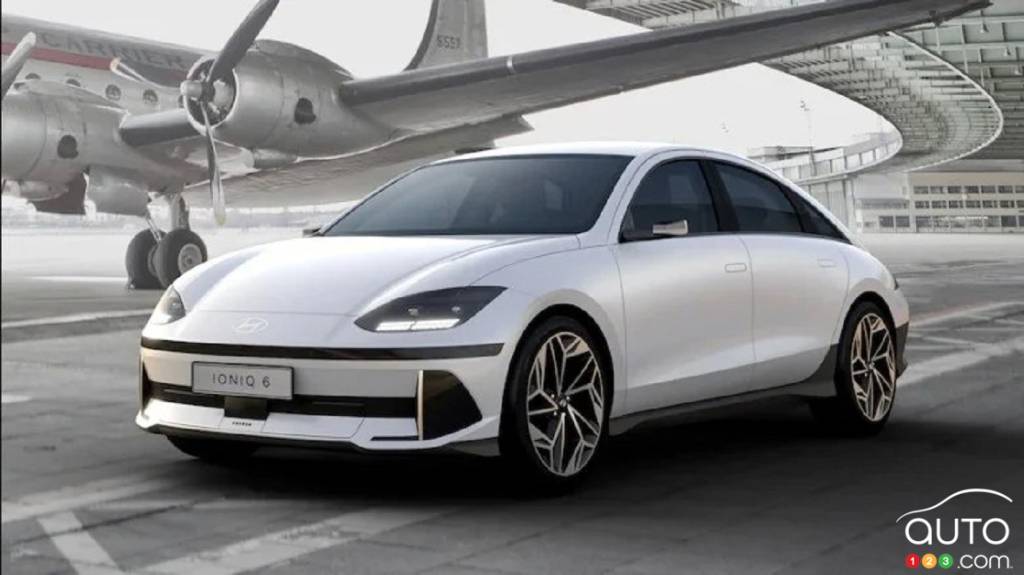 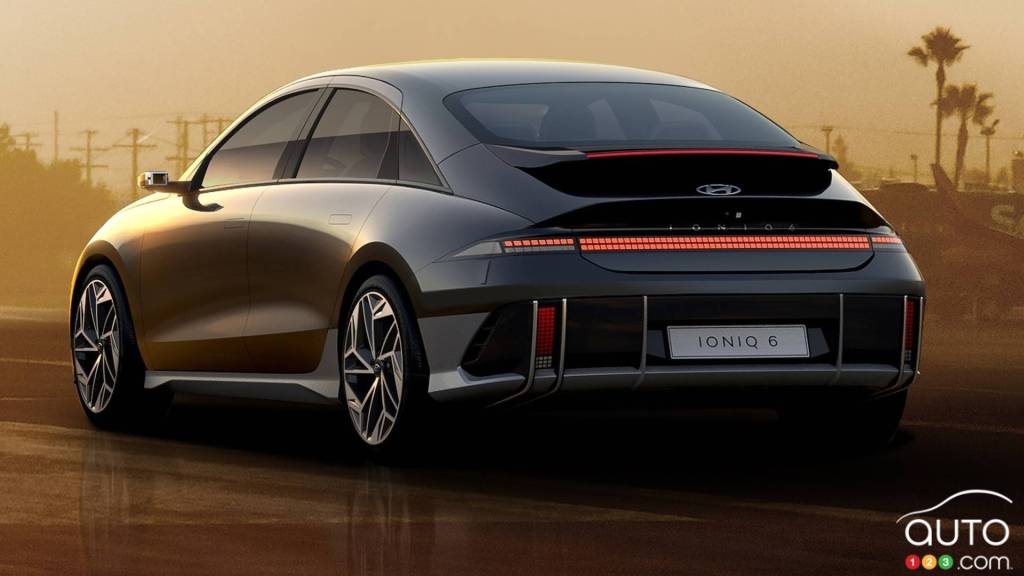 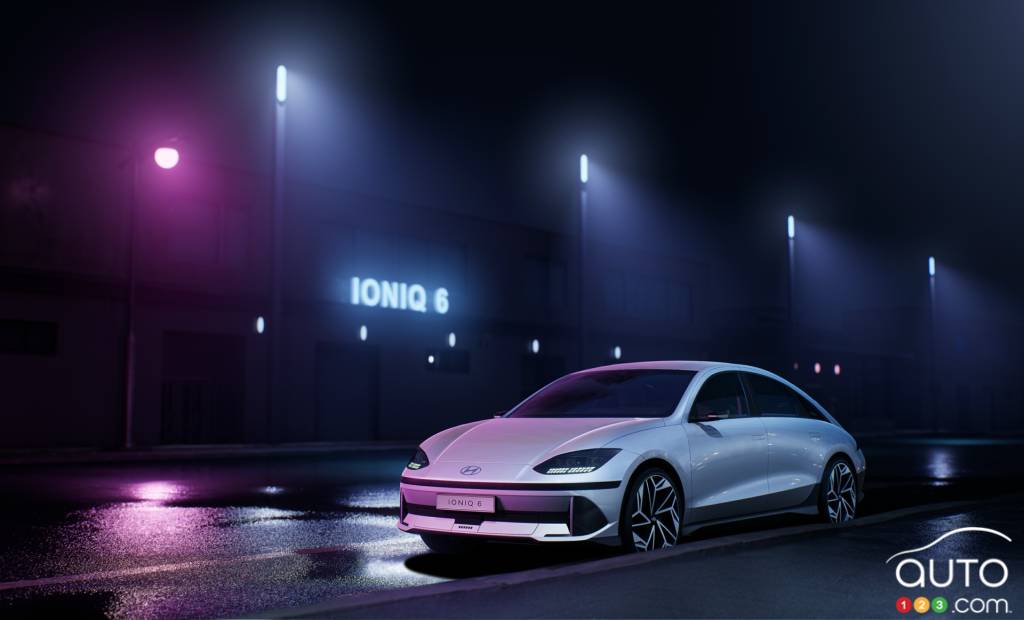 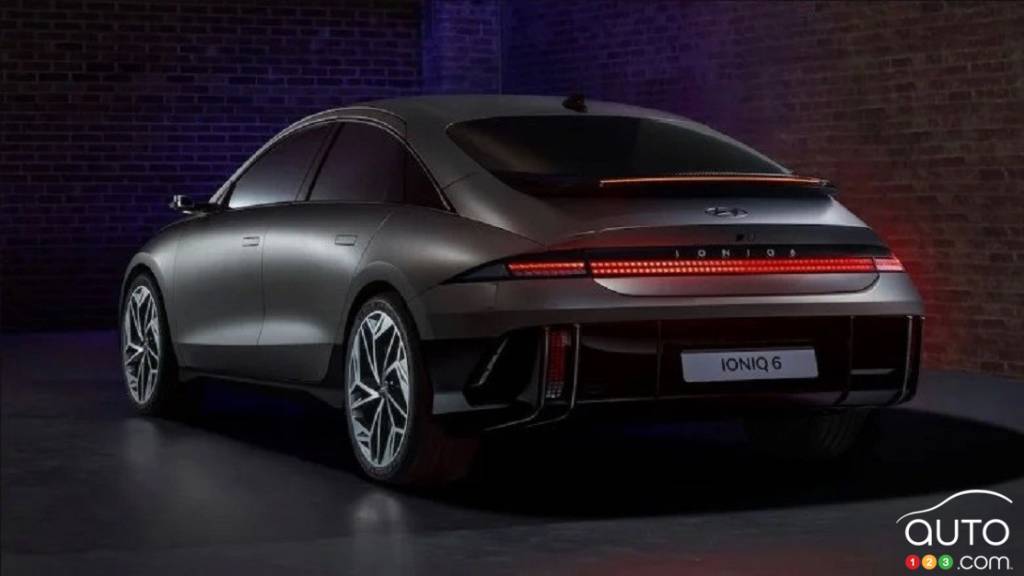 The figures confirm what many expected regarding the range of the Hyundai Ioniq 6: it will be better than that of the Ioniq 5. That's due in small part to so...