A few years ago, the Hyundai/Kia group reinvented the continuously variable transmission with a system that the company called "intelligent". The Intelligent Variable Transmission was unleashed. With the use of a chain belt instead of a push belt, the companies promised better fuel efficiency - and that the IVT did. The average consumption rating for the Accent subcompact car went from 7.4L to 6.5L/100 km.

Now, the auto group is taking on the conventional automatic transmission, this time by adding a level of autonomy that will help make it more fuel-efficient.

In essence, the system is about anticipatory shifting technology, and it’s called the Information and Communication Technology (ICT) Connected Shift System. 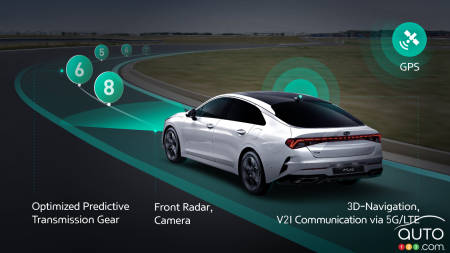 The system essentially allows the vehicle to automatically shift to the optimum speed after identifying the road and traffic conditions ahead. Thanks to 3D navigation information sent in real time by cameras and radar, the transmission box adjusts itself according to the situation. If it slows down in front, it will be proactive and downshift at the right time to maximize fuel economy.

Similarly, if climbs, descents or turns are detected, the transmission also adjusts itself so that the car behaves optimally in these situations.

All the information is transmitted to the car's control unit, which should improve both fuel efficiency and handling. According to tests carried out by the group, the ICT Connect Shift system has reduced the frequency of gear changes on roads with notable curves by 43%. The frequency with which brakes were required was also reduced by 11% under the same conditions. As a result, there’s also less wear on the brakes.

Hyundai and Kia plan to use the ICT Connect Shift system on their future models, but have not specified which ones will get it first. Needless to say, it will be an integral part of the manufacturer's autonomous-drive technology going forward.

What do we think?

At first glance, it's certainly impressive technologically, at least in terms of maximizing fuel consumption. On the other hand, we're dealing with yet another new technology that helicopter-parents the driver; there’s nothing interesting here for driving enthusiasts. Hopefully, the system will leave the choice up to whoever's behind the wheel.