Today’s new vehicles come with a host of airbags that help protect their occupants from all manner of intrusions into the cabin space coming from outside, as well as from the parts of the vehicle in front of the first-row occupants.

Some models even feature airbags designed specifically to protect knees.

But what about the potential danger posed by other objects found in the vehicle’s interior – namely, people? It’s actually a common occurrence during car accidents for the bodies of side-by-side occupants to knock into each other upon impact. Very often, the contact involves people’s heads.

Hyundai is working on a solution to this problem, and in fact the company just presented a new side airbag that works in the space above the central console, between the two front occupants. It deploys from within the driver’s seat and opens upwards far enough to protect the occupants’ torsos and heads. The bag is also tied to anchor points to ensure that stays in the correct position on deployment. 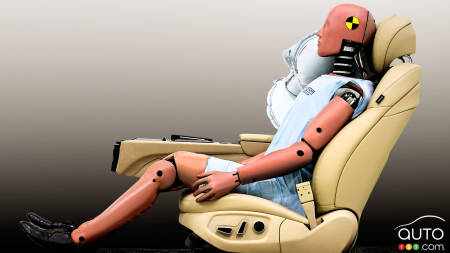 The company estimates that the new technology reduces the risk of injury by 80%. The airbag is designed to deploy during a collision whether or not there’s someone sitting in the front passenger seat.

Hyundai isn’t saying when it will start introducing the new airbag in its vehicles, but it does say it’s a certainty that it will, sooner or later. 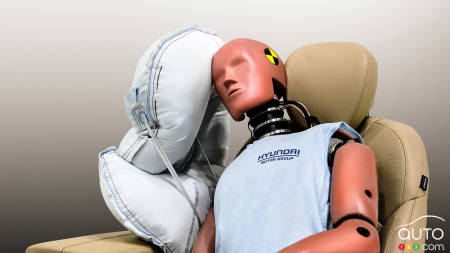 This morning, Transport Canada posted two Hyundai recalls, including one for 1,925 2012-2013 Hyundai Sonatas, because of a flaw in their airbag system, which...