INFINITI has released two images to preview the new QX Inspiration concept it will unveil at the 2019 North American International Auto Show in Detroit this month. Last month the company had published a first image of the concept’s silhouette.

The new concept gives a window into INFINITI's plan to develop high-performance electrified vehicles, and to the future design direction it intends to take to accompany the new technology. We’d previously gotten a glimpse at that new design language with the Q Inspiration concept, which debuted at last year’s Detroit show.

The QX Inspiration concept is built on a new platform designed with EVs in mind, meaning it has been conceived to allow for larger, open-space cabins. Think mini-lounge, and a high level of connectedness to the world outside the vehicle. 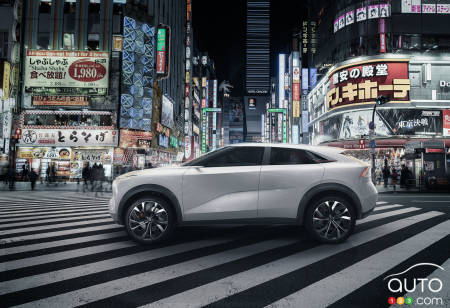 "QX Inspiration is the beginning of a new era for INFINITI and an illustration of where we want to go with the brand. New technology has given us the opportunity to evolve our design philosophy – and the new vehicle communicates the serene strength at our core."

There’s no word yet on the exact makeup of the electric powertrain that will run the new SUV, or on the range it will get. Stay tuned, as INFINITI's new concept will be revealed in Detroit on Jan. 14.

INFINITI is at the 2019 Detroit auto show to present its QX Inspiration concept, an electric SUV that previews the brand’s future direction in the electric m...

INFINITI Gives First Look at its Electric SUV Ahead of De...

INFINITI has released a first teaser image of its new all-electric SUV concept that will be unveiled at next month’s Detroit auto show. 30 years after the br...