The 2018 North American International Auto Show in Detroit gets under way in just over a week, and several vehicle models are already on the confirmed list of launches. INFINITI, for one, will be introducing the magnificent Q Inspiration concept, seen here.

The Q Inspiration provides a foretaste of what to expect from the next generation of INFINITI cars, not just in terms of styling but also of when technologies will power them. Adding to the interest for Canadians is that the development team for its creation was led by Montrealer and McGill University graduate Karim Habib, head of design at the Japanese automaker.

"The new INFINITI concept car will take the traditional sedan architecture to its next stage of evolution. A shift toward smarter, more compact and less intrusive powertrains; we were able to create an alternative form with flowing gestures, more engaging in character and more enriching in experience. With its long cabin, balanced proportions and muscular stance, the concept heralds in a new era for INFINITI models."

As per current trends in the industry and the segment, the new sedan will be coupe-like in form and muscular in overall appearance – an appearance dominated by the super-thin headlights and taillights, a large glass roof and large, striking wheels. Under the hood, we can expect to find the all-new variable-compression turbo engine first introduced in the 2019 INFINITI QX50, if not something even more highly evolved. 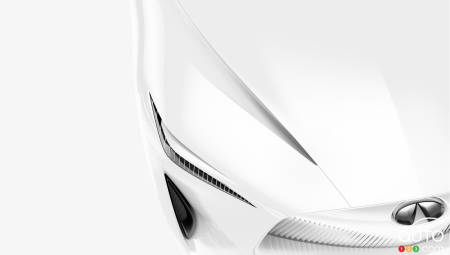 How to choose between the 2020 Acura TLX and the 2020 Infiniti Q50? Auto123 compares two sporty-ish Japanese sedans fighting for space in a segment dominated...

INFINITI is officially unveiling its Prototype 10 during Monterey Car Week as part of activities surrounding the Pebble Beach Concours d’Elegance. The new co...