Just as the pandemic was ramping up globally this past spring, James Bond fans were disappointed to learn that No Time to Die, the latest film in the juggernaut movie franchise, would not hit screens as scheduled; its debut was pushed back to November.

Now, just weeks before the 25th Bond movie was to launch, those itching for their Daniel Craig fix have received the news their patience will be tested some more.

Of course, we were particularly itching to see the Aston Martins that feature prominently in the film: the DB5 V8 Vantage and the new DBS Superleggera and Valhalla.

With cases of Covid-19 surging across the globe and movie theaters once again closing their doors, the folks behind No Time to Die have decided to push back the premiere of the movie until April 2, 2021 – nearly a year after it was originally supposed to have debuted.

“We understand the delay will be disappointing to our fans but we now look forward to sharing No Time To Die next year.”

No Time to Die represents Daniel Craig’s last kick at the can as the world’s most famous spy, Agent 007. Opposite him we find Oscar-winner Rami Malek as the movie’s principal villain, as well as returning figures played by Naomie Harris (Moneypenny), Léa Seydoux (Madeleine Swann) and Christoph Waltz (Ernst Stavro Blofled).

Here’s hoping there won’t be need for a third postponement next spring, as that would mean the spread of the virus has still not been controlled. 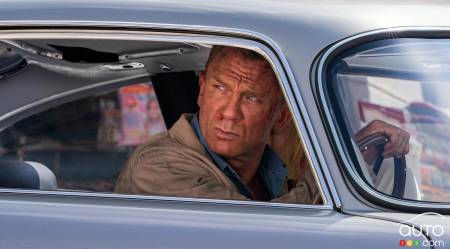 The release of the new James Bond movie is delayed due to the coronavirus. Originally scheduled for April 10, it has been postponed to the end of November. T...

A collection of images and short videos of cars put up for grabs on The Price Is Right is yours to enjoy via a dedicated Instagram account. The show, which i...