We were in Utah a few weeks ago to test drive the diesel-powered version of the 2020 Jeep Wrangler, but at that time the company was not ready to provide official fuel-consumption figures for the version. It did go so far as to promise a 30% improvement in comparison with the V6 engine versions, but that was it in terms of specifics.

Now the company has revealed the official numbers for its 2020 Wrangler EcoDiesel version. 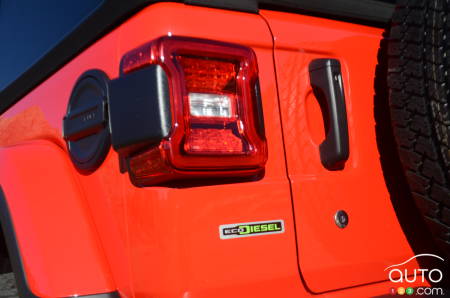 These are certainly impressive results for the diesel-powered Wrangler, but keep in mind there’s a substantial price difference between it and the other variants, to the point where it’s hard to see where the savings come in, even over the long term. Here in Canada, the 2020 Jeep Wrangler EcoDiesel will cost buyers $7,395 more than the version equipped with the V6 engine.

Which makes it a question of preference whether consumers should go for the diesel version or not. And of torque, of course, since this version delivers an exceptional 442 lb-ft of torque and transforms the driving experience both on and off the road.

After months of anticipation, the diesel-engine version of the Jeep Wrangler has finally arrived. We headed to Utah to take the 2020 Jeep Wrangler EcoDiesel ...