The Chicago Auto Show takes place from February 8 to 17. Traditionally the focus at this event is on trucks and SUVs, and it appears this year won’t be any different.

One of the new vehicles we’ll be seeing presented for the first time is a special edition of the Jeep Wrangler. The company’s accessories division has concocted what’s called the Wrangler Mopar Jeep Performance Parts edition of the popular SUV model. Buyers of the Wrangler have always been able to deck their Jeep out in numerous add-ons from the Mopar catalogue, but here the company has decided to take the bull by the horns, if you will.

Thus the special edition that will come out from under the veil at the Chicago show is a variant all gussied up beforehand by the folks at Mopar. 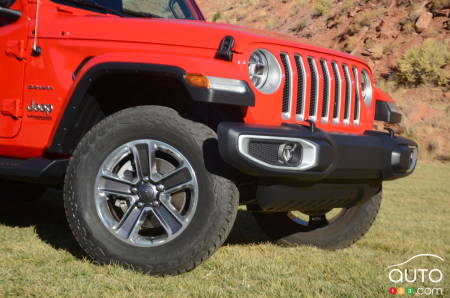 The image Jeep has teased to whet our appetites prior to the reveal shows the rear side panel on the model’s passenger side. Visible are a few modifications, for instance the steel tube doors, off-road-friendly tires and an identifying decal near the right rear light. That’s surely just a foretaste of the many modifications being made to the version we’ll see in the flesh next month,

For more on the Wrangler Mopar Jeep Performance Parts edition, stay tuned for the traditional Media Day at the Chicago show that takes place just prior to the doors opening to the public.