The concept of solar-power roofs on cars has been bandied about before, but Kia and Hyundai promise to bring the nascent technology to mass-market vehicles, and do it as early as 2019. The Korean automakers don’t plan to restrict the technology to electric cars either, in fact they plan to start with hybrid models, and eventually fit them on even gasoline-powered vehicles.

The solar-panel roofs would recharge vehicles’ battery packs, of course, while on vehicles with combustion engines they would power ancillary systems like the radio, seat and steering-wheel heating systems and so, which would improve fuel economy.

According to Kia and Hyundai, there will be two types of roofs. Hybrid vehicles will get one kind, with the capability of charging the battery by between 30% and 60% in one day. The other roof, to be used in traditional combustion-engine vehicles, will be a semi-transparent panel lying over the panoramic sunroof. This is to allow light into the cabin at the same time as the ancillary systems are being powered. 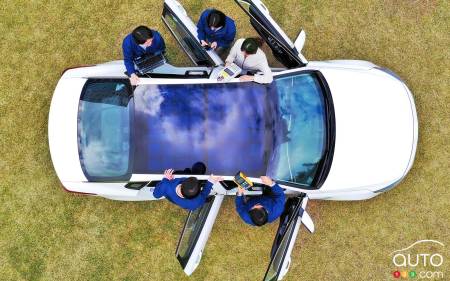 “In the future, various types of electricity generating technologies, including the solar charging system, will be connected to vehicles. This will enable them to develop from a passive device that consumes energy to a solution that actively generates energy.”

And why stop at roofs? Kia and Hyundai say they also plan to develop solar body panels to add more charging power. In the not-too-distant future your car’s hood and trunk cover could be recharging your battery system as you drive. 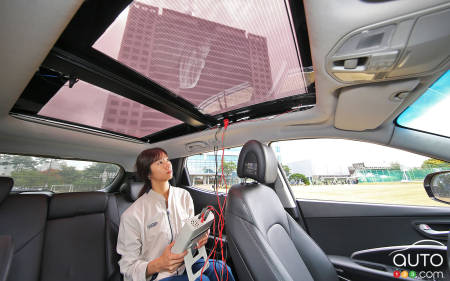