Once in a while, the serious business that is the automotive world and the media that covers it gets a reprieve, in the form of something lighter. Sort of a like a cat video. Except that sometimes it’s not a cat that’s the star of the show, but… a koala.

Here’s a story that’s been ping-ponging around the internet over the last 24 hours that should make your morning. Meet the koala bear that looked ready for a ride in an SUV… with it at the wheel.

Frankly, the images speak mostly for themselves. The scene, as you may have guessed, did not take place in Quebec, New Brunswick or British Columbia, but in Australia. And how did the animal end up there? That's where the story needs a little filling in.

Seems the koala in question was attempting to cross a road, except that the road was a six-lane highway. Predictably, the manoeuvre did not go well, especially for five motorists who, trying to avoid running over the animal, found themselves in the middle of a pileup.

Police said the accident, which occurred Monday morning in the city of Adelaide during rush hour, left some people injured, although fortunately none required transportation by ambulance.

One of those present at the scene, Nadia Tugwell, managed to retrieve the animal, placing it in the cargo area of her SUV. She then drove to a gas station where she was to turn it over to a wildlife official. She exited the vehicle to confer with that official, but when she returned, Nadia had the surprise of her life. 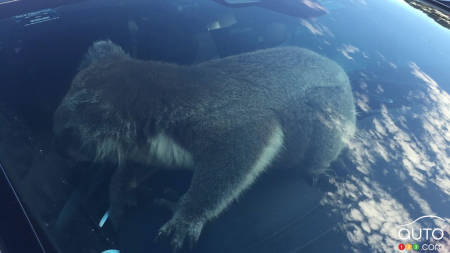 The koala had managed to move from the cargo area to the passenger area of the vehicle. Then, “It decided to come to the front toward me, so I said, ‘OK, you stay here. I’ll get out,’” she explained. “It started sitting for a while on the steering wheel, (as if ) saying ‘let’s go for a drive,’ and that’s when I started taking photos.” 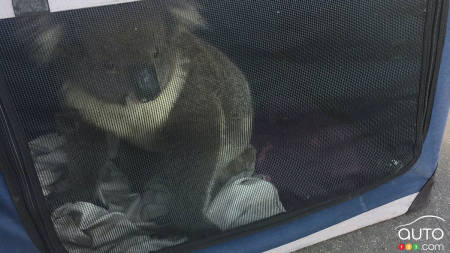 Tugwell explained she had learned in the past how to calm koalas by covering their eyes. She lives near a eucalyptus forest outside Adelaide and has twice called in experts to rescue koalas injured in fighting with other koalas.

The leather upholstery of her vehicle's interior was scratched by the animal, but Tugwell said the damage was minor and of little consequence considering that it ended well for the animal and everyone involved, despite the minor injuries by some motorists in the pileup.

The koala was, you’ll be glad to know, released in a forest. Far from the highway. 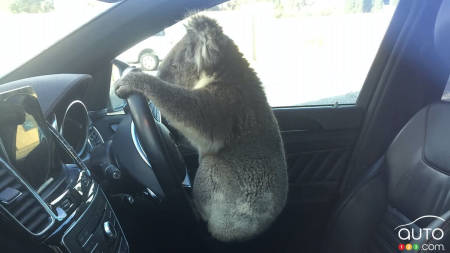 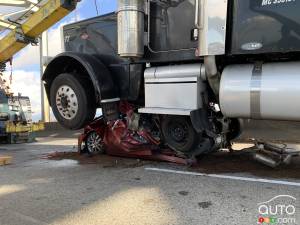 A video has surfaced of a train losing the rooftops of many of its cars as it passes under a bridge. Auto123 thinks you should see this incredible footage, b...