Nearly ten years ago, Lamborghini introduced a fully insane new model at the Geneva Motor Show. The Aventador was so unreasonable that its success among fans of the genre was assured – but who could have predicted how successful it would prove to be?

In the event, sales of the model grew consistently right from its debut. And so we reach the point of the Italian automaker’s announcement this week, that it has just assembled the 10,000th unit of the Aventador at its plant in Sant’Agata Bolognese, Italy.

As a point of comparison, the Murcielago model that preceded the Aventador, sold a total of 4,099 units during its lifetime. What’s more, the Aventador hasn’t reached the end of its road – its replacement is not due before 2022, at the earliest. If it ain’t broke…

The 10,000th unit built is an SVJ roadster featuring a Grigio Acheso finish with Rosso Mimir (matte red) accents. It also comes with a custom interior finish in Rosso Alala and black made by the Ad Personam personalization division as per the wishes of the buyer, identified by Lamborghini as a resident of Thailand.

The SVJ variant is the current flagship model of the Aventador lineup; it comes with the celebrated 6.5L V12 engine that delivers 759 hp (up from the 730 of the regular version). 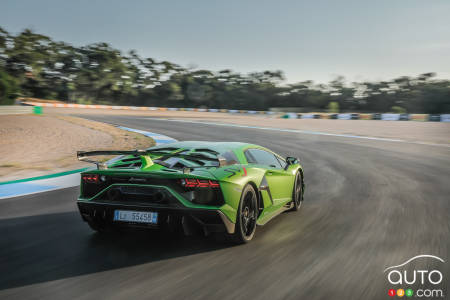 2020 Lamborghini Huracán EVO Spyder Review: Now This Is a...

The 2020 Lamborghini Huracán EVO Spyder has provocative, in-your-face looks, mechanics that are as innovative as they are overpowering, and an ability to tur...

Lamborghini’s bet seems to have paid off: the automaker has just announced it has now built 10,000 units of its new Urus SUV. While some second-guessed the ...