Lexus President Koji Sato has revealed that Toyota's luxury brand will offer its first autonomous drive system before the end of 2020.

In an interview with Automotive News, the executive confirmed that the system will offer autonomous driving capability, but that drivers will still have to watch the road and take over in an emergency.

The system will therefore be a Level 2 system on the SAE scale, which classifies autonomous driving capability on a scale of 0 to 5. The final, long-term objective, a Level 5 car, is a vehicle able to manage all situations by itself, and therefore capable of operating without a driver.

The Japanese automaker plans to introduce its system with the brand's flagship LS sedan. Recall that the automaker previously previewed the technology in the LS+ concept, unveiled in 2017. That prototype was equipped to drive autonomously on highways; the system it used was called, aptly, Highway Teammate. 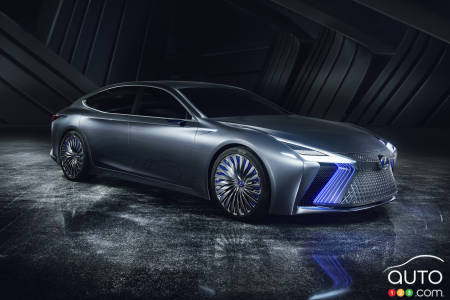 Lexus stated at the time that Highway Teammate could handle almost every aspect of highway driving from on-ramp to off-ramp, and so could merge into traffic, maintain lane position, adjust speed, change lane, pass other vehicles and maintain distance between vehicles.

Other manufacturers offer similar systems, namely Cadillac with its Super Cruise technology, but the Lexus system previewed as Highway Teammate is one of the most advanced to date. However, it only works on highways for which there is sufficient map data.

Lexus parent company Toyota is currently working on its own system, which it plans to demonstrate next summer at the Tokyo Olympics. The Japanese automaker plans to add the Sienna van to its family of partially self-driving vehicles in 2021.