In Lexus parlance, the letter F stands for performance. However, pure F models have remained a rare breed within the lineup, only popping up in the luxury automaker’s lineup sporadically.

Lexus looks to be on the verge of changing tack, however. Indeed, Japanese website Best Car reports claims that Toyota's premium brand has three F models in the cards, and that they should be laid on the table this very year.

First, the report claims, we’ll see the return of the IS F, a variant we've seen in the past. Various rumours are floating regarding what it will get under the hood; on the one hand, it could benefit from the automaker’s naturally aspirated 5.0L V8, the same unit that powers the RC F coupe variant, in which it develops 472 hp and 395 lb-ft of torque. On the other hand, it could get the Supra's engine, an inline-6 that comes from BMW. This second possibility seems less likely, but we'll see.

As for the rumoured LC F and LS F, they could share a new 4.0L twin-turbo V8 engine that would offer something in the neighborhood of 660 hp and 479 lb-ft of torque.

The big question, of course, is whether these vehicles will actually see the light of day. As Lexus and Toyota have made much of their commitment to increasing their eco-friendliness, it would be a bit ironic for them to launch performance models with powerful V8 engines. At the same time, since this type of powertrain is in the last chapter of its story (at least as far as mass distribution is concerned), manufacturers might be on board for one last fling. We can see this with what the Dodge and Ram brands are offering at Stellantis, in particular.

Another interesting part of the report is that it claims the models would see the light of day this year. Which means we’ll know fairly soon if the rumours are well-founded or not. 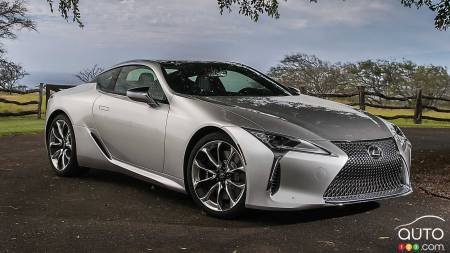 The 2021 Lexus LC 500 Convertible looked spectacular when it debuted in 2017 and still does, even as it ages. Here’s our review.

A V8 Engine for the Regular Version of the Lexus IS in 2021?

Rumour has it that a V8 engine will be offered with the regular version of the Lexus IS in 2021. The offer could be short-lived, however, as still other spec...