When I got back from covering the New York Auto Show, a thought dawned on me: the era of a green car showpiece has been postponed.

As I thought back on the 2015 edition of the NYIAS, I recalled a Toyota RAV4 hybrid and Lexus RX hybrid. And I think that covers all of the truly green unveilings. Sure, the new fortwo was there, but Mercedes needs to sell more than a few dozen to make it count. BTW, I think it looks cool but, well, that’s it at the moment.

The new Hyundai Tucson, Scion iA, Chevrolet Spark and Kia Optima were also on hand but they’re appliances of mass consumption and as such show no real evolution towards reducing fuel consumption and greenhouse gasses.

The most recent Shanghai Auto Show was more of the same with only a handful of hybrids, but a fair number of performance and luxury cars including the McLaren 540C, Mercedes-Benz GLC Coupe concept, Qiantu K50 Event!, Volkswagen Scirocco GTS, and others.

Could it be that green is not sexy and doesn’t sell cars, and (just maybe) people are tired of reading about the immanent end of the world, the demise of our existence, and terrible ways?

EVs, PHEVs and hybrids are not necessarily bearers of bad news, but they do represent a form of austere living.

I’ve nothing against these electrified cars, in fact, I love the Porsche 918 Spyder, McLaren P1, Acura NSX, and Ferrari LaFerrari that use this technology to keep car enthusiasts and consumers alike interested in cars and the business as a whole.

Let’s not forget that these are car “shows” and not car “conferences.” In which case I suspect the media attention would be much different -- if there at all. Carmakers exist to make money, and by default have created an industry and jobs. They need to sell cars; and power and opulence are gold.

Green just ain’t turning anyone on at the moment. It’ll be back (there’s no doubt in my mind), but for the moment let’s bask in the glory of big horsepower, massive exhaust notes, and acres of the finest hides.

The 2015 edition of the NYIAS was good. Most of it was expected, however, not all reveals turned out exactly as planned, and that’s a good thing. Surprises n... 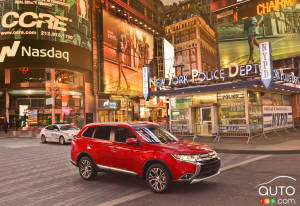 The new 2016 Mitsubishi Outlander debuting at the New York Auto Show has been redesigned and re-engineered to stand out in the competitive small crossover se...

Chevrolet today introduced the all-new 2016 Spark at the New York Auto Show, marking a completely redesigned and more sophisticated execution of the brand’s ...