Details are slowly emerging about the upcoming resurrected 2020 Ford Bronco, expected to be revealed in the flesh at some point in 2019, but these details are submerged in a bucketful of rumours, renderings, dodgy spy shots and whatnot. At this point it’s maybe safer to shrug our shoulders and say who knows how the new Bronco will shape up and what will run it, we’ll just have to wait and see.

One fairly solid bit of info we’re hearing, however, has to do with the transmission of the truck. It appears likely that the product offering will include a manual transmission.

A teaser image released by Ford earlier this year revealed that the new Bronco will retain the boxy overall shape that characterized the original 60s-era Bronco – and this 2004 concept version of the Bronco you see above, which was presented at the 2004 Detroit auto show. 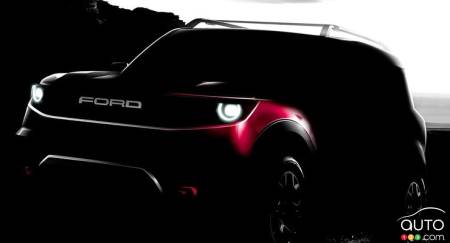 We’re also fairly certain the new Bronco will come only in a four-door version; Ford has flat out said there isn’t a big enough market for a two-door SUV. This is a bit of surprise, given that the new Bronco will be competing most directly with the Jeep Wrangler, which sells extremely well in both formats. Four-door or not, the new Bronco will, apparently, come with a removable roof.

As for that manual gearbox, purists have been lamenting the gradual disappearance of the stick shift and three pedals from the North American landscape, and these folks will certainly rejoice at the prospect of its being available in the new Bronco. But we’ll wait to see just what percentage of future Bronco buyers actually chooses that format when buying the vehicle.

Ford’s Baby Bronco Could Get the Puma Name

Ford has filed for a trademark on the Puma name with the World Intellectual Property Office. The name might be destined for use on the so-called “Baby Bronco...

Ford showed a new two-door version of its upcoming Bronco to brand dealerships at a private event, according to a report by Automotive News. Reaction among d...