Ambition is not in short supply at Mazda. Even though it doesn’t fight in the same weight class as the world’s biggest manufacturers like Honda, Toyota or Volkswagen, the Japanese automaker has always been an innovator on the technical front. The brand’s first and most striking distinguishing mark? The first rotary engine developed for a sports car in the 1960s and offered with the company’s sport coupe, the Cosmo, in 1967.

When you get to celebrate 50 years of existence, you must be doing something right – and Mazda continues to do it right. Looking back on that half-century in Canada brings back to mind many highlights that have marked the company’s exceptional history, and it’s in this context that we were invited to spend a memorable day driving iconic old models taken from different periods in Mazda’s history.

This special driving excursion was part one of a two-day event that will also feature the official presentation of the new 2019 Mazda MX-5. We’ll be there for that as well, so stay tuned for our first drive of that exciting model tomorrow!

JINBA ITTAI
When it comes to the celebrated MX-5, Mazda used a design credo during the creation of all four generations of the model, known as Jinba Ittai (人馬 一体, [dʑimba ittai]). The expression translates roughly as “rider (jin) and horse (ba) as one body (ittai)”.

Radiant sunshine and wonderfully comfortable temperatures saw us off as we headed out on an exploration of small roads in agricultural areas with our six classic Mazda models. I left the Mazda offices behind the wheel of a 2014 Miata MX-5 25AE (actually the 25th anniversary special edition of the model). This was a mighty fine way to start the excursion, as this particular model, which by the way had only 10,205 km on it, represented an important moment for the Miata MX-5. Mazda adorned it with a host of details that make this exclusive model (only 100 were made for all of Canada) highly distinctive.

The car, animated by Mazda’s philosophy of focusing on the pleasure of driving, has a 2.0L engine, close to 50/50 weight distribution, several visual elements like the 25th Anniversary plaque on the door sill, the unique number with 25th Anniversary badge, and a variety of other little bits of attention to detail, which add up to make it wholly unique. In addition, the dashboard sports a Takumi red hand-painted panel, which reflects light remarkably well. At the time of its launch, the model sold for $40,925.

I followed up with drives of other Miatas, including a 1990 first-generation model. At that time Mazda played up not only the road handling of its small roadster, but also the ergonomics of its cockpit. I have to say that, in a period where electronic components were virtually non-existent on dashboards, the interior of the 1990 Miata features only the bare essentials necessary to operate the car. It’s worth noting that internally at the small automaker, the Miata was not a pre-approved project, and going ahead with it was risky endeavour.

The model actually took shape as part of an internal design competition between teams based in Japan and in California; the ideas presented became a prototype and ultimately a production model, and the iconic roadster was born.

The other Miata that was part of our vintage convoy on this day was a 2004 MX-5 Mazdaspeed. This model introduced turbo compression in combination with a 1.8L engine that produced 178 hp, for an increase of 25% compared to its predecessor, and featured a close-ratio 6-speed manual gearbox that enhanced the driving experience.

THE ROTARY ENGINE: THE GENESIS OF MAZDA
Mazda made its name when it introduced the rotary engine, in an era when all the other manufacturers were producing cylinder engines. I had the chance to drive the very first version of the RX-7 several years ago (it was produced between 1979 and 1985). I remember feeling the freedom being emitted by its engine; it seemed like it rev without end and produced impressive power. I can tell you I relived that exact same emotion when driving the two RX models on this day.

The first was the third-generation RX-7 from 1993 (the model was produced between 1991 and 1995). The second was the RX-8, which had returned to the market after an eight-year absence, and was sold from 2003 to 2012. Our car was a 2011 model. Some may remember this sports coupe that had four doors; the two rear doors open backwards, suicide-style.

Mark Peyman told us he even installed a baby seat in his, access to the back row being much easier thanks to those suicide doors. This model had benefited from technological upgrades and both road handling and comfort levels were much-improved. The company had two rotary engines at that time, which produces 212 hp and 232 hp respectively, and the RX-8 weighed only 1,350 kg, helping it perform that much more exceptionally.

DRIVING PLEASURE
The most remarkable takeaway from this day of driving classic Mazda models is that, in each model from each era, driving pleasure was front and centre. Obviously there were technological advances, but road handling was always at a high level.

Mark Peyman, National Manager, Product Strategies & Development at Mazda Canada, told us how the company’s engineers and designers are singularly focused on reinventing the Mazda product. He said, “they don’t look at what the others do and will always try to find their own niche, by looking with passion, curiosity and creativity towards the future, planning what’s coming further down the road with a serious and innovative outlook.”

Peyman also confided to us that Mazda is now at a stage where the company wants to develop its cars, through all the processes from conception to assembly, as artistic works.

“My dream is to elevate the positioning of the brand to a superior level, to make of it a genuine premium brand. I want Mazda to instill superior quality in each product, in each dealership, in each piece of merchandise. This is the next step for Mazda.”

The future is certainly bright for Mazda, not only because of their many innovations with their next-generation SKYACTIV-X system, but also because of the excellence of their vehicles’ designs. The Mazda RX-Vision Coupe, for example, was named Most Beautiful Concept Car of the Year in France.

This award is presented to the prototype that best incarnates the notions of esthetic beauty, design creativity and modern trends, as chosen by a jury made up of eminent architects and fashion designers. Mazda received the same award for the Mazda RX-VISION – meaning both versions of Vision Concept, which presage the designs of the next generation of Mazda cars, took home this prestigious award.

“My responsibility is to create the formula that will compel people to drive. If we had to create a vehicle that you don’t drive (an autonomous car), it form wouldn’t have to call you to drive it. But I want to make the car your friend, your lover, a member of your family. And to do this, I put a lot of passion and my soul into the design, so that it feels like a living thing.”

The story of Mazda in Canada began in 1968, and continues today thanks to products that are highly advanced on the mechanical front.

I want to thank, personally and on behalf of Auto123.com, Chuck Reimer, Sandra Lemaitre and all the good people at Mazda Canada for inviting us to experience an exciting day of zoom-zoom driving. Tomorrow, on to the new MX-5! 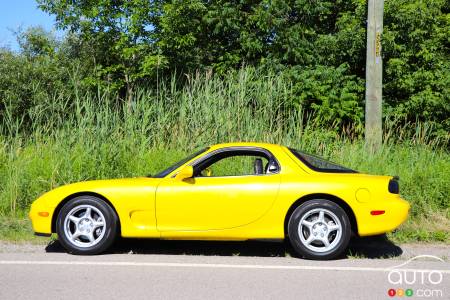 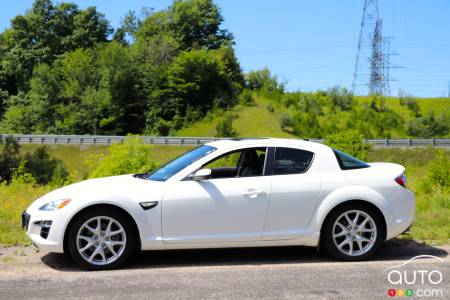 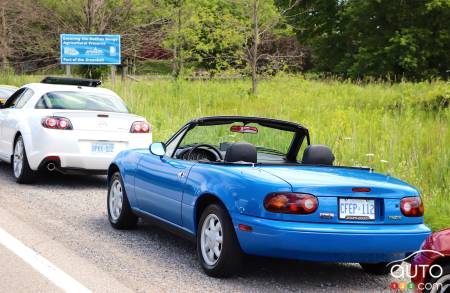 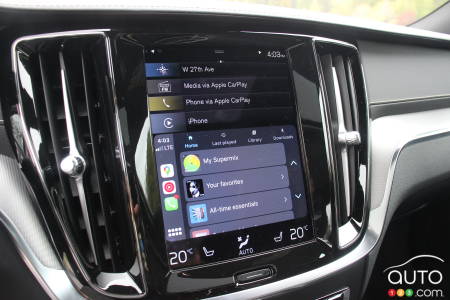 Mazda Canada has announced pricing and details for the various versions of the new 2019 Mazda MX-5 and MX-5 RF, which should be available at dealerships as o...

We now know more details regarding the new 2019 Mazda MX-5 roadster, which will be available to Canadian consumers this summer. Mazda says the new edition of...