As promised a few weeks ago, a completely reimagined and re-engineered Mazda6 sedan made its global debut at the 2017 Los Angeles Auto Show. Look for it to arrive at dealerships next spring.

The word from now on is “premium.” That’s the approach Mazda is using to stand out from the new Honda Accord and Toyota Camry and even raise above all mainstream competitors. In fact, there’s a brand new top-of-the-line model called Signature, similar to how the CX-9 crossover is marketed.

The Mazda6’s chassis has been thoroughly revised to provide a more supple ride, greater agility and dramatically improved NVH levels. The available brown Nappa leather is inspired by the aged wood in ancient Japanese temples, while the UltraSuede trim is adorned with a subtle gold tint, using a similar technique to the one used to make ornate kimonos. Furthermore, Sen wood accents imitate taiko drums and Japanese furniture.

Under the hood
Perhaps the greatest upgrade to the 2018 Mazda6 Signature is the addition of the SKYACTIV-G 2.5T gasoline turbo engine, which produces 227 horsepower (250 with premium gas) and 310 lb-ft of torque. Meanwhile, the naturally aspirated SKYACTIV-G 2.5 base engine gets a number of updates including a class-exclusive cylinder deactivation system for improved fuel economy. That’s right: the new Mazda6 can run on just two cylinders in certain conditions!

The exterior design expresses the “Mature Elegance” philosophy that we saw in late October with the striking Vision Coupe concept at the Tokyo Motor Show. The new grille accentuates a look of depth, with a strong framework, low center of gravity and wide stance. The car’s standard LED headlights integrate fog lamps and carry a crisp, wide lighting signature. On the sides, new 17- and 19-inch wheel designs complement the upgraded appearance. Finally, Soul Red Crystal has been added to the palette of available paint colours. 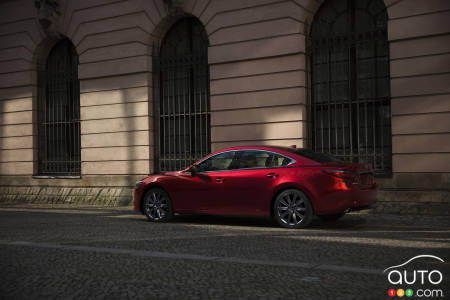 Beauty on the inside
The interior of the 2018 Mazda6 is all-new, with only the steering wheel and small trim pieces carried over from its predecessor. Most noticeable is the horizontally stretched dashboard that accentuates the Mazda6’s width and belies a sense of sophistication, especially on Signature models.

The front seats have been fully redesigned. They are wider, filled with high-density, vibration-absorbing urethane foam and designed in an S-shape that better follows the contours of the human body. Available ventilated front seats are a first for the brand. The rear seats have also received upgrades for increased comfort. 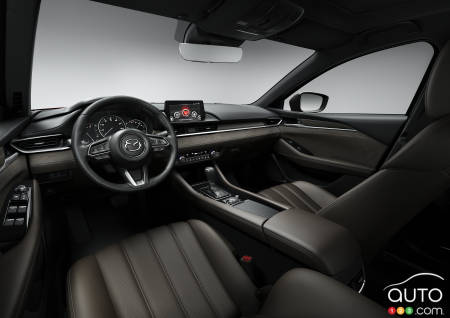