It's rare that a car manufacturer is forced to recall vehicles that are more than 15 years old, but that's the situation Nissan is facing these days.

The cause? Those Takata airbags, of course. Again. Now, here as before the problem is not Nissan's fault at the outset, but rather defunct supplier Takata, whose airbag inflators were found to occasionally explode and send shrapnel into the faces of vehicle occupants. There have been numerous cases that included serious injuries and even fatalities.

To date, 26 deaths have been recorded around the world as a result of these airbags. That's why we and others continue to hammer home the importance of having them removed if a recall includes your vehicle. Lives are potentially at risk.

In this latest case, the recall involves 2002-to-2006 editions of the Sentra sedan. This generation of the Sentra was, you may recall, very popular with consumers and can still be found in large numbers on the road.

A total of 3,930 units are being recalled, including 656 in Canada. Here's how Transport Canada summarizes the upcoming recall campaign: 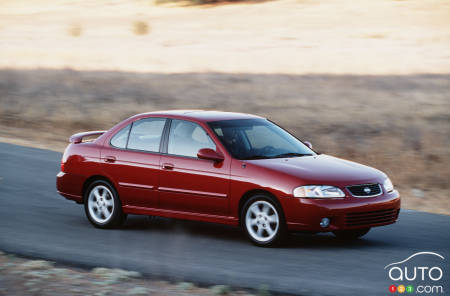 If the recall campaign is being implemented only now, it’s for a specific reason: initially the Sentra models concerned had been identified as having a different type of airbag and thus they had not been targeted in earlier recalls issued by Nissan.

Transport Canada states that “Owners will be notified by mail and instructed to take their vehicle to a dealer to replace the passenger-front airbag inflator”.

As is often the case with models this old, some current owners may be difficult to reach. This is why we ask owners to be proactive in this case. If you are the owner of a Nissan Sentra from 2002 to 2006, don't hesitate to contact Nissan Canada at 1-855-835-3854. You can also check here to see if your vehicle is impacted by the recall.