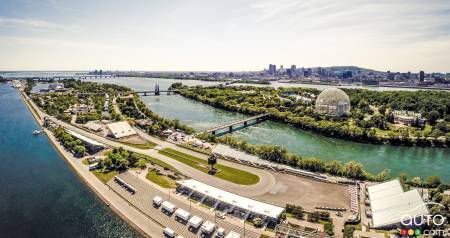 Auto123 invited a husband-and-wife team of race fans share their experience of the two 2022 Sentra Cup races held during the weekend of the Montreal F1 extravaganza, this past June 17-19. We turn over the microphone to Hélène Crépault, sister of Auto123 contributor Michel, and Andrew Simmonds. Today, his take; tomorrow, it’s her turn!

Who wouldn’t want to be a race car driver? Young or old, who hasn’t thought about driving fast? You probably have a go occasionally, throwing caution to the wind and putting your foot down just for the fun of it. You’re not late, not stressed for time, you just want to enjoy the sensation.

The emotion
It’s not just the speed, there’s definitely more to the experience. Sometimes, if you're in the right mood and the stars align, there's a feeling of connection. You are in control of something a lot more powerful than yourself. Sitting behind the stirring wheel you can at times feel at one with the car. It becomes an extension of yourself. And who doesn’t like that?

If it’s not just me and you have also experienced something similar, imagine getting out of your ordinary car and into a professionally prepared race car. On a scale from 1 to 10, it’s going to crank all of those sensations all the way to 11. It’s no wonder a lot of us are drawn towards F1, Nascar, rallying and other types of car racing.

Those series take the emotions of dynamic driving and add to it the excitement of competition. There's something very attractive, and I’ve been told very addictive, about trying to go faster than the other guy.

However, sadly, a lot of the racing world is out of reach to the majority of us. The overwhelming cost of going fast on the track rules out the possibility of getting in enough practice to improve enough to be competitive. So, what to do? Our friends at Nissan have come up with a solution that opens the door to the racing world: the Sentra Cup.

The solution
It’s a, forgive the pun, turn-key answer for those who have the desire to race but not the bottomless pockets required to get to the podium. First part of the solution: the race car.  At a cost of $39,900, this may raise a few eyebrows but a quick Google search reveals that at the end of 2021, the average cost of a new car in Canada is, and I quote, ‘’upwards of $45,000.’’  This puts the price into perspective.

Nissan has chosen their newly revised Sentra to be the base platform, but a race car doesn't need all the creature comforts that makes the Sentra such a good road car. And so, it's given over to Motosports in Action, in St-Eustache, Quebec, whose team turns a comfortable passenger car into a racer. I won't list all the modifications in detail, suffice to say the suspension, wheels, brakes, seats, and motor, as well as a long list of other parts, are changed to ensure the car can safely compete in a race scenario.

The finished modified car was given the stamp of approval after being tested by Jean-François Dumoulin, professional race-car driver based in Quebec. The team at Motosports in Action also lightened the car as much as possible, removing all non-essential items to ensure the car can accelerate, change direction and brake as efficiently as possible.  It’s all starting to sound quite exciting, and all for under $40,000. 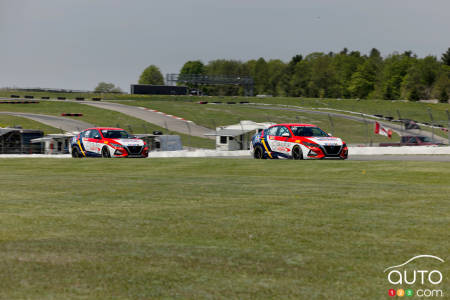 The competition
The second part of Nissan's solution is intensity. It’s a completely level playing field. When you line up on the starting grid, because of Nissan’s rules, everyone around you has the same level of performance. All the cars are exactly the same, so wealth can’t buy you an advantage.

Not exactly the situation in the F1 world. If you've watched, like my wife and I have, the Drive to Survive series on Netflix, you know that F1 is filled with intense rivalries between teams, a constant need to acquire very wealthy sponsors plus skilled and experienced engineers who understand the nuances required to create a winning car.  The best driver also needs to be in the best car.

In the Nissan Sentra cup, to get to the checkered flag, you are going to need driving skills, determination and bravery.  Competition is fierce, with competitors such as Simon Charbonneau, Stéfan Rzadzinski, Valérie Limoges and Marie-Soleil Labelle who are no strangers to the podium.

With speed comes risk, as we witnessed many times during the Sentra races. At the Circuit Gilles Villeneuve, wet and windy conditions made the track slippery and dangerous on Saturday, so the yellow flag was seen on many occasions.

On Sunday, three of the competitors (Justin Arseneau, Alex et Daniel Fortin) let their eagerness get the best of them, leaving the trackand causing enough damage to remove them from the race. My wife sitting next to me was a constant source of ‘ooohs’ and ‘ahhhs’. As long as nobody gets seriously hurt, accidents are part of what makes racing an unpredictable and exciting sport. 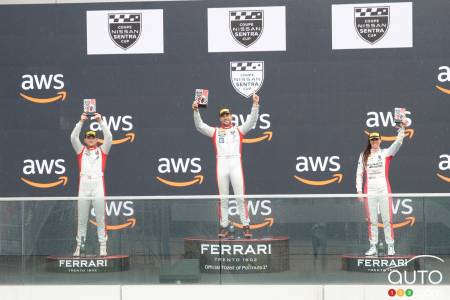 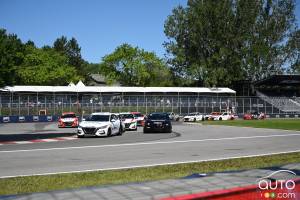