This week Auto123.com was on hand to participate in the official opening of the brand-new, new-concept Kia Val-Bélair dealership in Québec City.

In operation since January 2018, the new franchise belongs to the La Force Kia group, which also owns Kia Québec and Kia Ste-Foy. The latter is in fact the biggest retailer of electric vehicles in the country.

A major $9 million investment went into making the new dealership one of the first to adopt Kia’s new global image, an architectural style it calls Red Cube, for the futuristic-looking red cubic-proportioned building it is based on.

Mr. Ted Lancaster, VP at Kia Canada, was on hand for the event. 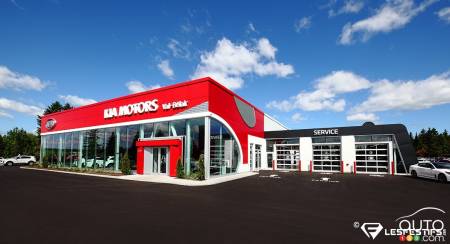 At the new dealership, seven charging stations for electric vehicles are being made available not only to clients but to the surrounding population. Of the seven, three are rapid-charging Level 3 stations. They will be offered free of charge to users for a period of two months.

In addition to courtesy cars, the dealership is offering a service that may just be unique in Canada: the use by clients of a bicycle while their car is in for service! Four bicycles as well as helmets are available for customers to use. There’s even direct access form the service area to the adjoining bicycle path!