American food-drink giant PepsiCo, which makes Gatorade, Frito Lay, Starbucks and many other products, expects to receive its first delivery of Tesla semi trucks in the fourth quarter of this year.

The company’s top boss, Ramon Laguarta, confirmed this to CNBC in an interview on Monday. Reuters also reported the news.

You may recall that PepsiCo ordered 100 units of the future all-electric semi back in December 2017, an order made as part of its goal to reduce fuel costs and fleet emissions. 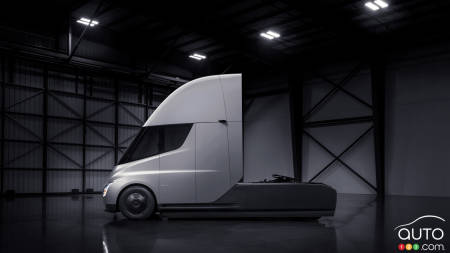 According to Laguarta, transportation alone accounts for 10 percent of PepsiCo's gas emissions. The company has said it wants to use Tesla's trucks to move food and beverages between manufacturing and distribution centres, as well as to retailers.

PepsiCo and Tesla have not yet commented on the news of the pending deliveries.

Walmart Inc, shipping company J. B. Hunt and food distributor Sysco are among the other large corporations that have ordered Tesla semi trucks.