Hertz had some pretty major news to announce this week. The company said that it has ordered 100,000 Tesla cars for its rental operations, a move that will cost $4.2 billion. As Bloomberg reported this morning, this is the largest purchase of electric vehicles to date by any company, in any sector.

The models will begin appearing in airports and other rental sites as soon as next month, son in time for the Christmas holiday period. The rollout will continue through 2022 and include European locations as well.

Hertz also announced that customers renting a Tesla Model 3 before Feb. 1, 2022, can use Tesla's charging network for free recharges.

The announcement does not specify whether all 100,000 units ordered are Model 3s, but no other company vehicles are mentioned. Ultimately, 20 percent of the vehicles offered by Hertz will be electric. 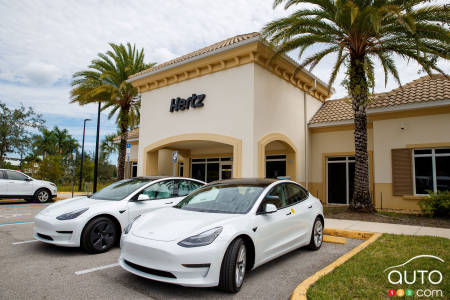 A big part of this deal, of course, is that Hertz customers will be able to use Tesla's extensive network. Hertz also said it will install “thousands” of chargers in the United States and Europe. Hertz plans to install Level 2 and fast-charging (DC) stations in 65 cities by the end of 2022 and in more than 100 cities by the end of 2023. The rental giant did make mention of possible “semiconductor chip shortages or other constraints” that could delay the process.

Hertz is also promising faster bookings through an EV-specific feature on the Hertz app.

And if you're wondering if this is a first for Hertz, the answer is no. In 2011, the company offered its first electric vehicles and in 2013, Tesla Model S cars were available for rent at California airports. In 2017, however, Hertz and Enterprise told Car and Driver magazine that they were reducing their electric vehicle offerings due to low demand.

Things are changing rapidly. Also, to think that just over a year ago, there was talk of the financial difficulties Hertz was experiencing due to the pandemic. In May 2020, the company actually filed for bankruptcy protection. What a difference a year and change makes…

Tesla has increased Canadian pricing on two of its models, which happen to be the most in-demand in the lineup. The Model 3 Standard Range Plus now costs buy...