All-electric vehicles may be gaining in popularity in Quebec and to some extent in British Columbia, but for them to be a real success in North America generally, American customers will have to get on board. Until they do, electric mobility will remain marginal.

Fortunately for those who believe in the cause – particularly those with money in the game - the results of a recent study conducted by Consumer Reports are encouraging, at least at first glance. They show that 7 out of 10 Americans say they’re interested in buying an electric vehicle.

For manufacturers, currently pouring billions of dollars into making the transition from combustion-engine cars to those you plug in, this is excellent news. Between now and 2024, about 100 new all-electric models are expected to hit the North American market.

However, there are some nuances to be made when looking the survey results. The biggest one is that not all of those who make up the 70 percent of interested folks are quite ready to take the leap just yet.

The just-published study polled 3,392 adults holding a valid driver's permit in the United States, between July 29 and August 12 of this year. It shows that only 4 percent of respondents expect their next vehicle will definitely be electric, while 27 percent would consider it.

That brings us to 31 percent.

Then, 40 percent of drivers say they have some interest in purchasing this type of vehicle in the next few years, but that this will not necessarily be the case for their next vehicle.

That brings us to 71 percent. The remaining 29 percent are gas-engine die-hards not interested in purchasing a battery-powered vehicle.

See also: One Out of 6 American Consumers Ready to Consider an EV (from May 2019) 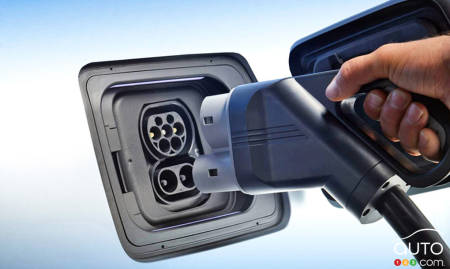 And Consumer Reports explains further that interest varies with age.

When it comes to concerns that may cause motorists to bypass EVs, range remains an important issue. Half of respondents explain that it will be easier to consider buying an electric vehicle if it has a range of about 500 km (over 300 miles). Cost is also a concern, but as we reported last week, price parity with gas-powered vehicles may be just around the corner. Electric models may well be cheaper than their combustion-engine brethren in a few years.

This will undoubtedly convince a few fence-sitters, and even shake the certitudes of those diehards.

Recharging times, the quality of the network and access to a charging station at home or in the home also remain concerns.

Progress is being made on all fronts, it should be noted, but it will take time.

The transition is likely to be exponential, however, and that is my bold prediction. Only time will tell, but there’s no doubt the picture will change drastically over the next decade.

Study Shows That One in Five EV Buyers Goes Back to a Gas...

A recent study from California shows that 20 percent of electric-vehicle buyers then return to a gasoline-powered model. The electric car itself is not the i...

42% of Americans Think an Electric Car Needs Gas to Run

A new study carried out by Ford reveals that 42% of Americans believe an electric vehicle needs gasoline to function. Results like this serve to remind us al...