Legendary automaker Porsche will turn 70 in June and various festivities and events will allow fans and the company to celebrate this anniversary together.

For example, a special exhibition called The Porsche Effect will start this Saturday, February 3, at the prestigious Petersen Automotive Museum in Los Angeles. Also, on June 9, Porsche will be inviting sports car fans to its “Sports Car Together Day” at all of its sites around the world, including the Porsche Experience Centers in Atlanta and Los Angeles. Then, from September 27-30, the Rennsport Reunion VI vintage races and fan event in California will celebrate the anniversary, as well.

History tells us that the first vehicle to bear the Porsche name was registered on June 8, 1948: the 356 "No.1" Roadster. The Type 356 was Ferdinand Porsche’s dream of a sports car, which his son Ferry Porsche turned into a reality. The colossal work accomplished by the former during the previous decades, particularly when it comes to engines and all-wheel drive systems, can’t be overlooked.

“Without our tradition and without our core values, we would not be where we are today. We plan to uphold the standard of technical excellence set by Ferry Porsche well into the future. […] We have what it takes to ensure that the Porsche brand continues to fascinate—even in another 70 years."

- Oliver Blume, Chairman of the Executive Board, Porsche AG

And in case you’re wondering, Ferdinand Alexander, son of Ferry Porsche, designed the car that replaced the 356: none other than the Porsche 911.

Now, after embracing smaller, turbocharged engines and introducing a few plug-in hybrid models such as the phenomenal Panamera Turbo S E-Hybrid, Porsche will soon follow that up with an all-electric car based on the 600-horsepower Mission E concept and offering an estimated range of more than 500 kilometres. But don’t worry, "Porsche will always be Porsche—the leading brand for exclusive, sporty mobility," reinforces Blume. 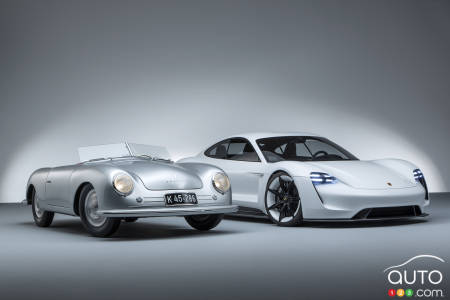 Porsche 911 to be Central Feature at Goodwood Festival of...

The iconic Porsche 911 will mark its 50th anniversary with a memorable "Central Feature" display at the 2013 Festival of Speed in Goodwood, England (July 11-...

Professor Ferdinand Alexander Porsche, an honorary member of the German manufacturer's supervisory board and the man behind the 904 Carrera GTS and the 911, ...