Porsche recently introduced two high-performance version s of existing models in its product line, the GT4 version of the 718 Cayman and a Spyder variant of the 718 Boxster. Both are powered by a new flat-6 engine developed for them.

Although it might not have been just for them. Porsche has just confirmed it had bigger plans for this new unit than to have it service two niche products. We can expect to see the 6-cylinder mill migrate to other models across the company’s product range.

The new 4.0 engine in question has virtually nothing in common with the 3.0L 6-cylinder unit that powers the 911, according to Andreas Preuninger, head of Porsche’s GT division. The executive confided to the Car & Throttle website that his team developed several components for the new engine, including pistons, housing, crankshaft and cylinder heads, among other parts. The company took this costly step because the 718 cannot accommodate the 911’S engine. It was also decided that a 4cylinder turbo engine would simply not be credible in the eyes of many potential buyers.

We believe in normally-aspirated engines, especially for cars in that niche -- puristic cars. To be frank with you, we can use this engine in the future on other models maybe as well.

The executive declined to confirm the new engine will be used in the 911, but he did not deny it either.

Left unsaid in all of this by Porsche is that the 4-cylinder engine found in the new-generation Cayman and Boxster has not been universally well-received. To wit, sales figures for 2019 to date have been tough on the 718; Porsche has sold 30% fewer of the model in both the U.S. and in Canada.
There’s better news for Porsche in the fact that the new 6-cylinder engine meets European emissions and noise standards. All the more reason for it to make its way into standard 718 models in the near-future. 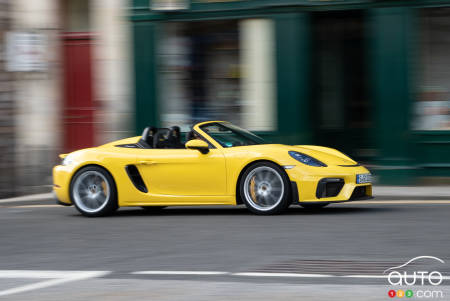 It wasn’t so long ago that Porsche jettisoned naturally aspirated 6-cylinder engines in favour of 4-cylinder turbo units, but now the big guns are returning ...

The 10 best 2021 vehicles according to Car and Driver

Car and Driver magazine's list of the top 10 vehicles for 2021 contains some of the usual suspects as well as some potential eyebrow raisers. Auto123 takes a...