The Toyota Tacoma got a significant revision in 2015, but since it faced precious little competition in its segment at that time, the makeover was a mild one. Things have changed since then, as new players have entered the ring, prompting the Japanese automaker to be more proactive and revisit its pickup sooner rather than later.

This week Toyota brought a moderately revamped 2020 Tacoma to the Chicago Auto Show, although we’re still not talking about a wholly new generation. The sense of urgency for Toyota to do something more drastic is muted by the fact that its product still dominates the category.

That said, it is clear that Toyota has put time and effort into this revision.

The changes brought to the 2020 edition include a revamp of the front grille, and that on nearly all the variants of the Tacoma. Making their debut as well are new front and rear lights. The focus, clearly, was on making the vehicle look refreshed.

Toyota has not published any photos of the interior as of yet, but did provide some details about what consumers can expect. For one thing, starting with the SR5 variant, a 10-way power-adjustable driver’s seat will be standard equipment – a first for the model.

The multimedia system has also been improved. Data is relayed via a 7-inch screen on the base model, which grows to 8 inches on the SR5 trims and above. 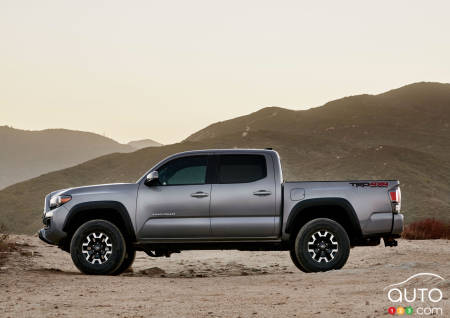 The powertrain
Here no changes have been made, so that the 2020 Tacoma gets the same 2.7L 4-cylinder engine as the default engine; its output is 159 hp and 180 lb-ft of torque. Those who want more from under the hood can opt for the 3.5L V6 that generates 278 hp and 265 lb-ft of torque. Both units can be combined with a 6-speed manual or 6-speed automatic transmission.

The 2020 Toyota Tacoma is expected at dealerships in the coming months. 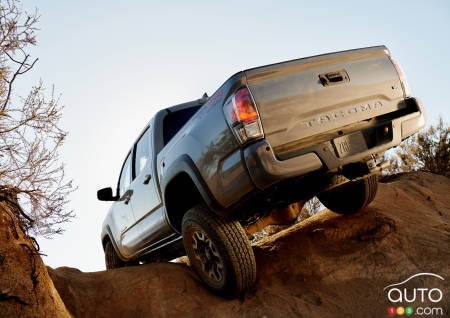 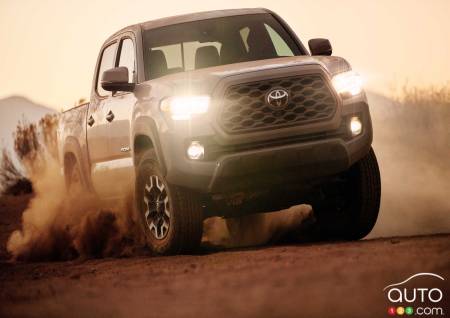 Toyota Canada is showcasing its new and improved 2020 Tacoma truck at the Edmonton Motorshow in a Canadian premiere. The exterior retouches and other upgrade...

So About That Electric Pickup Previewed By Toyota …

An electric pickup concept was one of several eye-catching concepts shown during Toyota's presentation this week. The model, which looks close to production,...