The next-generation GMC Sierra features a hatchback that can be opened in the usual way, but offers more versatility than that. A system of partial deployment is designed to make daily use easier for owners.

It appears now that RAM has developed its own multi-function tailgate, which it is set to present at the upcoming Chicago Auto Show, getting underway later this week. Clearly this is a tit-for-tat response to the piece of equipment now offered by GMC.

The mini-war being waged between the big rivals even made its way onto social media as part of the circus surrounding the Super Bowl this past Sunday in Atlanta. GMC fired the first salvo, touting the superiority of its tailgate in a promotional video that also declared the following: “The Rams already lost.”

This was obviously a reference to one of the two teams vying for the ultimate football trophy, the Los Angeles Rams.

A clever piece of marketing, to be sure.

FCA’s truck division RAM wasted little time coming up with a response, tweeting “Flag on the play. False start. Check back with us on 2/7/19.” And of course, that likely means RAM will be making a presentation on that day as part of the Chicago Auto Show.

Hats off to GMC for its daring in predicting victory for the New England Patriots, BEFORE the opening kickoff. Or maybe the company learned it’s just safer never to bet against Tom Brady and his crew.

As for the other RAM team, the one that’s part of the FCA (Fiat Chrysler Automobiles) Group, we’ll be on hand in Chicago to see precisely what it and the other auto manufacturers have to present. 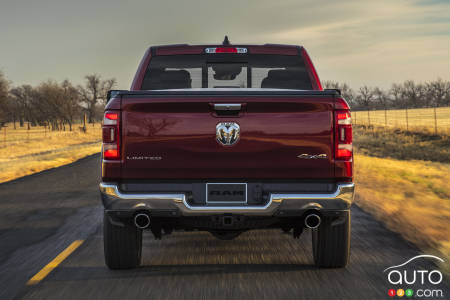