In 2016, GMC introduced an innovative new safety feature in its Acadia SUV that caught the attention of many consumers and industry watchers. A simple alert notified the driver leaving their vehicle of the possible presence of a rear-row occupant, whether a person or an animal.

The system works in simple, straightforward fashion: if a rear door is opened before the vehicle sets off, the system notes that a person might be seated in back. When the driver parks the vehicle and opens their door to depart, or even just turns off the engine, an alert tells them there might be someone in back.

While not perfect, the function will inevitably save lives; it might already have done so. Of course it’s impossible to know how many.

Gradually other manufacturers have followed GMC’s lead. One of the most aggressive in developing this technology is Hyundai, which has said that by 2022 most of its new models will be equipped with the system. In 2016, GM announced its intent to introduce it in over 20 of its models. 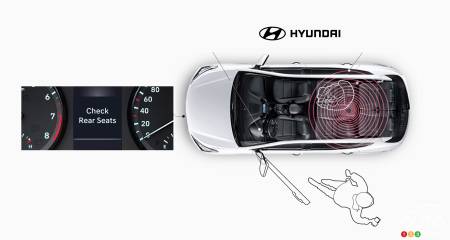 Now we learn that the majority of the big automakers have agree to include a version of the system in almost all new vehicles sold in the United States (and by extension in Canada) by 2025.

The concerted effort has a straightforward goal: to eliminate deaths of young children mistakenly left in the back seats of hot vehicles. And it comes as the Unites States Congress is looking at the possibility f making such systems mandatory in new vehicles. In July, the Senate Commerce Committee approved a law that would eventually oblige carmakers to integrate rear seat alerts in their products.

Not surprising then that manufacturers are trying to be proactive in the matter. In all, 20 manufacturers accounting for 98% of the models sold in North America have signed the new agreement.

A lot of the details remain to be worked out. Some groups want the technology to go further so that systems can differentiate between a grocery bag placed on the rear seat and a person occupying a car seats, for example.

Over the past two decades, between 800 and 900 children (and an unknown number of pets) have died after being forgotten in the rear seats of parked vehicles in North America.

The 30 Safest Vehicles for 2019, According to the IIHS

The IIHS (Insurance Institute for Highway Safety) has released its initial ranking of the 30 safest vehicles in 2019. The number of vehicles earning the best...